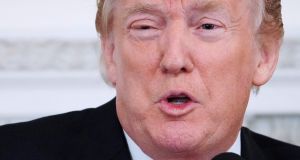 In a statement, the Trump campaign said it planned to use Parscale’s talent to help Republicans in the 2018 congressional elections in November as they try to hold on to control of the US Congress.

“Brad is an amazing talent and was pivotal to our success in 2016. He has our family’s complete trust and is the perfect person to be at the helm of the campaign,” said Eric Trump.

Trump (71) had already signalled plans to run for re-election, filing a letter of intent with the Federal Election Commission on January 20th, 2017, the day he took office. He frequently relives his victory in 2016 in speeches and interviews.

Parscale, based in San Antonio, Texas, was the Trump campaign’s digital director in the 2016 election. – Reuters

1 Parents jailed over female genital mutilation of daughter
2 Gardaí may have to wait days to interview mother of McGinley children
3 McDonald and SF candidates sign pledge to be guided by ard chomhairle
4 No obvious signs of injury on remains of McGinley children
5 General election debate: Leaders fail to hit home runs but avoid major mishaps
Real news has value SUBSCRIBE