Summit on Syrian war ends without agreement on Idlib ceasefire 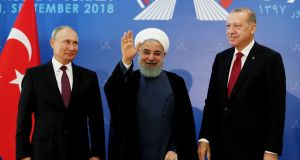 The presidents of Turkey, Iran and Russia on Friday failed to agree on a ceasefire that would forestall a Syrian goverment offensive in rebel-held Idlib province which the United Nations fears could cause a humanitarian catastrophe involving tens of thousands of civilians.

Turkey’s Recep Tayyip Erdogan, Russia’s Vladimir Putin and Iran’s Hassan Rouhani, meeting in Tehran for a summit of key foreign players in Syria’s war, agreed in a final statement that there could be no military solution to the conflict and it could only end through a negotiated political process.

But, as Syrian government and Russian warplanes mounted air strikes in Idlib on Friday morning in a possible prelude to a full-scale offensive, Mr Putin and Mr Rouhani pushed back against Mr Erdogan’s call for a truce. The Turkish leader said he feared a massacre, and Turkey could not accommodate any more refugees flooding over its border. Mr Putin said a ceasefire would be pointless as it would not involve Islamist militant groups it deems terrorists. Mr Rouhani said Syria must regain control over all of its territory.

Idlib is the insurgents’ only remaining major stronghold, and a government offensive could be the war’s last decisive battle. Tehran and Moscow have helped Syrian president Bashar al-Assad turn the course of the war against an array of opponents ranging from western-backed rebels to the Islamist militants, while Turkey is a leading opposition supporter and has troops in the country.

Their discussions in Tehran mark a crucial point in a seven-year-old war which has killed more than half a million people and forced 11 million to flee their homes.

“I think in general the Turkish president is right. It would be good. But I can’t speak for them, and even more so can’t talk for terrorists from Jabhat al-Nusra or Isis that they will stop shooting or stop using drones with bombs.”

Iranian supreme leader Ayatollah Ali Khamenei said in a meeting with Mr Putin on Friday that Iran and Russia can work together to restrain America, and that Syria is a good example of how America can be restrained, according to his official website.

“One of the issues that the two sides can co-operate on is restraining America,” the ayatollah said, “because America is a danger for humanity and there is a possibility to restrain them.”

“The Americans have faced a real defeat in Syria and have not reached their goals,” he added.

In the final statement, the three agreed on the need to eliminate Islamic State, Jabhat al-Nusra and other groups linked to al-Qaeda and designated as terrorists. But there were were other armed opposition groups who could join any ceasefire agreement, they said.

The communiqué also called on the United Nations and the international community to step up humanitarian aid to Syria and help in restoring basic infrastructure assets. Efforts must be made to protect and to create conditions for the safe return of refugees, it added.

Mr Rouhani said the battle in Syria would continue until rebels were pushed out of the whole country, especially in Idlib, but he added that any military operations should avoid hurting civilians. He called on all rebels in Syria to disarm and seek a peaceful end to the conflict.

“The fight against terrorism in Idlib is an indispensable part of the mission to return peace and stability to Syria, but this fight should not harm civilians and lead to a ‘scorched-earth’ policy,” Mr Rouhani said. Mr Erdogan said Turkey no longer had the capacity to take in any more refugees from Syria should the government offensive in Idlib go ahead.

Turkey has accepted 3.5 million refugees from Syria since the start of the war in 2011. “Whatever reason there is an attack that has been made or will be made will result in disaster, massacre and humanitarian drama,” he said. “Millions will be coming to Turkey’s borders because they have nowhere to go. Turkey has filled its capacity to host refugees.”