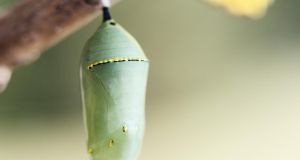 ‘Cocooning’: think of it as the community temporarily wrapping a soft blanket around its most vulnerable members. Photograph:

In his widely praised St Patrick’s Day address to the nation, outlining the challenge we face as a result of the coronavirus pandemic, Taoiseach Leo Varadkar used a term that many people had never heard of before, at least in a health context: cocooning.

“At a certain point . . . we will advise the elderly and people who have a long-term illness to stay at home for several weeks. We are putting in place the systems to ensure that if you are one of them, you will have food, supplies and are checked on. We call this ‘cocooning’ and it will save many lives . . . particularly the most vulnerable,” he said.

When I searched through the medical journals, I couldn’t find any definitive reference to cocooning. However, it does appear in marketing journals and books. The term was reportedly coined in 1981 by Faith Popcorn, a marketing consultant.

In her 1991 book, The Popcorn Report, Popcorn describes cocooning as “the impulse to go inside when it just gets too tough and scary outside. To pull a shell of safety around yourself, so you’re not at the mercy of a mean, unpredictable world – those harassments and assaults that run the gamut from rude waiters and noise pollution to crack-crime, recession and AIDS. Cocooning is about insulation and avoidance, peace and protection, cosiness and control-a sort of hyper-nesting.”

So the term appears to lie in a domain somewhere between psychology and sociology – perhaps even a “pop” version of both. And in a coronavirus context, it has some decidedly “iffy” origins in the UK’s initial response to the pandemic.

Cocooning first featured in a press briefing by the UK chief scientific adviser, Sir Patrick Vallance; chief medical officer, Prof Chris Whitty; and a government science adviser, Dr David Halpern.They indicated that the government’s strategy was to allow the virus to pass through the population, to allow individuals to “acquire herd immunity” at a delayed speed, while vulnerable groups were “cocooned”. Halpern heads the government’s behavioural insights team, colloquially known as the “nudge team”.

Herd immunity is a phrase normally used when large numbers of children have been vaccinated against a disease such as measles, reducing the chances that others will get it. As a tactic in fighting a pandemic for which there is no vaccine, it is highly questionable. And the linkage of herd immunity with cocooning, is, in my view, irresponsible.

Allowing a population to build up immunity in this way – rather than through widespread testing, tracking down the contacts of every case and isolating them – increases the risk to the most vulnerable: older people with underlying health problems. To reach herd immunity would require about 60 to 70 per cent of the population to become ill with coronavirus. With high mortality rates in older people, such a policy is ageist and borders on involuntary euthanasia.

It’s unfortunate that cocooning has become tainted in this way. I prefer the definition offered by Prof Beate Kampmann, director of the vaccine centre at the London School of Hygiene and Tropical Medicine, who says cocooning means that a “ring of immune people” protect the vulnerable people in the middle.

Among the many rapid changes brought about the coronavirus epidemic is the introduction of new language to our mainstream conversations. As well as cocooning, we have had to familiarise ourselves with quarantine and how it differs from the term isolation. Quarantine, a strategy aimed at containment, confines healthy, asymptomatic people exposed to an infectious disease for the duration of the incubation period, to contain the spread of the disease. Isolation, on the other hand, refers to separating patients with active infection from healthy, unexposed people, with the aim of preventing transmission.

Meanwhile, cocooning, despite its unfortunate conflation by British authorities, is, at its core, a benign exercise. Think of it as the community temporarily wrapping a soft blanket around its most vulnerable members.