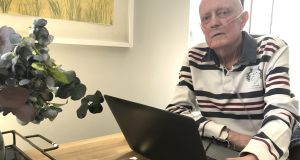 Paddy Murray: “I look at screens and look out the window. I’m looking for hope.”

There appears to be no end in sight to this self-isolation.

What makes it worse is that due to my pre-existing health difficulties, my self-isolation puts more pressure than is fair on my wife and daughter.

I know I’m over-thinking this thing. It’s inevitable with little or no social contact to entertain me!

It would be easy to wander around the house in pyjamas and dressing gown for the day. It’s not like we’re going to have visitors.

But that’s giving in. And I firmly believe that fighting illness of any kind can hold it back. In a way, I’m living proof of it, having outlived my prognosis by several years. So far.

But I’m still housebound bar the odd stroll around my immediate neighbourhood with the dog or giving Connie and Charlotte a lift somewhere – though I don’t get out of the car.

I meet the occasional neighbour when I walk. But they know to stay away from me and we have conversations with me on one side of the street and them on the other. My oxygen tubes remind those who have forgotten that my medical condition requires me – and them – to be careful.

I checked with the coronavirus helpline again and I am still allowed, encouraged even, to walk as long as I don’t get close to anyone.

Because the few I have encountered who don’t know me look like they’re about to run for cover as I approach with the oxygen machine slung over my shoulder and tubes going into my nose. It seems, for some, it’s like ringing a bell and shouting: “Unclean, unclean.”

There are three of us effectively imprisoned together for the foreseeable future.

We have shared this space for just short of 14 years. Indeed, my daughter has a 14th birthday coming up very soon. I can’t imagine it’s going to be a whole heap of fun.

I feel more sorry for Connie and Charlotte than I do for myself.

If you’re being careful – and I hope you are – they’ve got to be twice as careful because of my health.

Charlotte now, at least, has schoolwork to occupy her for a few hours a day. And there’s certainly enough of it to occupy most of the hours which would be in a normal school day. And the school has provided all sorts of options for online education and, indeed, some entertainment.

But unlike a normal school day, there’s no meeting friends outside the school gates to spend a little time “hanging around” which, if it was a school subject, would be a favourite and would see quite a few of the girls getting A grades in the Leaving.

And fair dues to the Dublin School of Music, which is now giving Charlotte her guitar lessons through Skype. I hope she ends up better at it than I did.

It’s tough on the younger set. It’s particularly tough on teenagers who are just learning about life, about adulthood, about responsibility and much else.

Right now, that’s all on hold. And that can’t be good.

I’m reading a lot. And after a few depressing tomes I was gifted Above Average at Games: the Very Best of PG Wodehouse on Sport. It almost makes up for the total lack of live sport for me to watch on television.

And yes, I’m glued to a screen of one kind or another half the day. If I was a teenager, someone would tell me to stop.

But I’m desperate for good news and there’s not much of it about. There seem to be daily reports about people determined to defy advice, people who don’t care about themselves or others.

Britain seems to have a large cohort which, frankly, doesn’t give a damn.

But it doesn’t take big numbers. It takes only a handful to spread this damned virus. And we certainly have that handful in Ireland.

It’s going to be a long time before we can return to normal and the chances are, no, the certainty is that normal then will not be the same as normal a few months ago.

I’m over-thinking. That’s probably why I’m pretty sure that the way we lived in early 2020 is gone and when this pandemic finally goes away we’ll all behave differently.

For now, though, I look at screens and look out the window.

And when I think of our neighbours, so many of whom have offered their help, when I read of thousands of health workers volunteering in this emergency, when a friend in the Department of Health tells me of the 12-plus hours he is spending at his desk every day and when I see the stories of extraordinary kindness, I see hope.

And that makes my isolation just about tolerable.

Juggling a newborn, a toddler and a daughter with special needs in lockdown
6

Jimmy Gralton, the only Irishman ever deported from Ireland
10

Paul Flynn: ‘I still have all my old menus. One dish stands out: bang bang chicken’
Real news has value SUBSCRIBE