13 Deaths in a Day: An ‘apocalyptic’ coronavirus surge at an NYC hospital 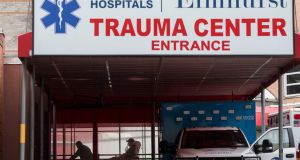 A patient is brought to the emergency room at Elmhurst Hospital Center in Queens, New York. Photograph: The New York Times

In several hours on Tuesday, Dr Ashley Bray performed chest compressions at Elmhurst Hospital Center on a woman in her 80s, a man in his 60s and a 38-year-old who reminded the doctor of her fiance. All had tested positive for the coronavirus and had gone into cardiac arrest. All eventually died.

Elmhurst, a 545-bed public hospital in Queens, has begun transferring patients not suffering from coronavirus to other hospitals as it moves toward becoming dedicated entirely to the outbreak. Doctors and nurses have struggled to make do with a few dozen ventilators. Calls over a loudspeaker of “Team 700,” the code for when a patient is on the verge of death, come several times a shift. Some have died inside the emergency room while waiting for a bed.

A refrigerated truck has been stationed outside to hold the bodies of the dead. Over the past 24 hours, New York City’s public hospital system said in a statement, 13 people at Elmhurst had died. “It’s apocalyptic,” says Bray (27), a general medicine resident at the hospital. Across the city, which has become the epicentre of the coronavirus outbreak in the United States, hospitals are beginning to confront the kind of harrowing surge in cases that has overwhelmed health care systems in China, Italy and other countries. On Wednesday evening, New York City reported 20,011 confirmed cases and 280 deaths.

More than 3,922 coronavirus patients have been hospitalized in the city. New York governor Andrew Cuomo on Wednesday offered a glimmer of hope that social-distancing measures were starting to slow the growth in hospitalisations statewide. This week, the state’s hospitalisation estimations were down markedly, from a doubling of cases every two days to every four days.

It is “almost too good to be true,” Cuomo said. Still, hospitals are under siege. New York City’s hospitals run the gamut from prestigious teaching institutions catering to the elite to public hospitals providing care for some of the poorest communities in the nation. Regardless of whom they serve, few have been spared the impact of the pandemic: A flood of sick and fearful New Yorkers has besieged emergency rooms across the city.

Working with state and federal officials, hospitals have repeatedly expanded the portions of their buildings equipped to handle patients who had stayed home until worsening fevers and difficulty breathing forced them into emergency rooms. Elmhurst, among the hardest-hit hospitals in the city, is a prime example of the hardships medical centres and their staff face across the country.

Dr Mitchell Katz, the head of the Health and Hospitals Corporation, which operates New York City’s public hospitals, says plans were underway to transform many areas of the Elmhurst hospital into intensive care units for extremely sick patients. But New York’s hospitals may be about to lose their leeway for creativity in finding spaces. All of the more than 1,800 intensive care beds in the city are expected to be full by Friday, according to a Federal Emergency Management Agency briefing obtained by The New York Times. Patients could stay for weeks, limiting space for newly sickened people.

Cuomo said on Wednesday that he had not seen the briefing. He said he hoped officials could quickly add units by dipping into a growing supply of ventilators, the machines that some coronavirus patients need to breathe. The federal government is sending a 1,000-bed hospital ship to New York, although it is not scheduled to arrive until mid-April. Officials have begun erecting four 250-bed hospitals at the Jacob K. Javits Convention Center in Midtown Manhattan, which could be ready in a week. US president Donald Trump said on Wednesday on Twitter that construction was ahead of schedule, but that could not be independently confirmed.

Officials have also discussed converting hotels and arenas into temporary medical centres. At least two city hospitals have filled up their morgues, and city officials anticipated the rest would reach capacity by the end of this week, according to the briefing. The state requested 85 refrigerated trailers from FEMA for mortuary services, along with staff, the briefing said.

A spokeswoman for the city’s office of the chief medical examiner said the briefing was inaccurate. “We have significant morgue capacity in our five citywide sites, and the ability to expand,” she says. In interviews, doctors and nurses at hospitals across the city gave accounts of how they were being stretched. Workers at several hospitals, including the Jacobi Medical Center in the Bronx, said employees such as obstetrician-gynecologists and radiologists have been called to work in emergency wards. At a branch of the Montefiore Medical Center, also in the Bronx, there have been one or two coronavirus-related deaths a day, or more, said Judy Sheridan-Gonzalez, a nurse. There are not always enough gurneys, so some patients sit in chairs. One patient on Sunday had been without a bed for 36 hours, she said.

Rikki Lane, a doctor who has worked at Elmhurst for more than 20 years, says the hospital had handled “the first wave of this tsunami”. She compared the scene in the emergency department with an overcrowded parking garage where physicians must move patients in and out of spots to access other patients blocked by stretchers.

Family members are not permitted inside, she said. Lane recalls recently treating a man in his 30s whose breathing deteriorated quickly and had to be put on a ventilator. “He was in distress and panicked, I could see the terror in his eyes,” she says. “He was alone.” – New York Times