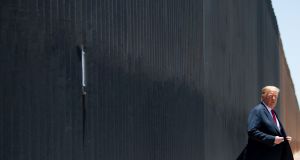 President Donald Trump participates in a ceremony commemorating the 200th mile of border wall at the US border with Mexico in San Luis, Arizona, on Tuesday. Photograph: Saul Loeb/AFP via Getty Images

US president Donald Trump touted his administration’s success at curbing illegal immigration into the United States as he toured a section of the US-Mexico border wall in Arizona on Tuesday.

Stating that illegal immigration was down 84 per cent compared with a year ago – a figure that has been impacted by the coronavirus pandemic – Mr Trump said that no administration had done more to secure America’s southern border.

“Our border has never been more secure,” he said, accusing presidential rival Joe Biden and Democrats of wanting “open borders” and “criminal sanctuaries”.

Mr Trump, who was due to address a “Students for Trump” rally in Phoenix last night, inspected a section of a 200-mile segment of the steel wall, signing a plaque attached to the barrier. Earlier, he described the structure as “just about unclimbable”, and “the most powerful” barrier in the world.

Mr Trump’s visit to the electorally-important state came a day after he signed a presidential order expanding immigration restrictions, by halting the issuance of new visas for certain categories of foreign workers until the end of the year. He also extended a ban on green-card applications until at least next year.

Speaking at the border wall on Tuesday, Mr Trump defended the move, stating: “We want to give jobs to Americans right now.” But he hinted that some breakthrough on Daca – the programme that protects young Americans who arrived in the country illegally as children – could be imminent.

Mr Trump also warned those who vandalise or remove federal statues that they could face 10 years in prison, following fresh disturbances in Washington DC on Monday night.

Protesters gathered in Lafayette Park, just beside the White House, with some trying to topple a statue of former president Andrew Jackson. The 19th-century president, whose treatment of native Americans has long overshadowed his legacy, has become a fresh target in the debate about the removal of statues in the US. The word “killer” was painted on the base of the monument, and ropes were placed around the bronze statue, but it did not fall. Police then dispersed protestors with chemical sprays, and some were arrested. On Tuesday a large section of the area around the White House had been cordoned off and guarded by armed law-enforcement personnel.

Speaking in Arizona, Mr Trump said that while states “have been extremely weak in protecting their heritage, protecting their culture,” he would protect federal statues, monuments and buildings.

“They want to take down George Washington, ” he said, referring to the first president of the US. “I don’t think we’re going to let that happen.”

During the disturbances in Washington, the letters “BHAZ” were sprayed on St John’s church adjacent to Lafayette Square, referring to “Black House Autonomous Zone.” The city of Seattle has already seen the establishment of a police-free autonomous zone, though the mayor has now ordered protesters to leave the area.

Mr Trump warned that any attempt to set up such a zone in the nation’s capital would be met with “serious force”.”

“There will never be an ‘Autonomous Zone’ in Washington, D.C., as long as I’m your President,” he tweeted. “If they try they will be met with serious force!”

Mr Trump also said that some of the protesters were now in jail, describing them as “vandals and hoodlums . . . anarchists and agitators”.

“Call them whatever you want. Some people don’t like that language, but that’s what they are. They’re bad people. They don’t love our country, and they’re not taking down our monuments.”

Meanwhile, Mr Trump is due to welcome Polish president Andrzej Duda to the White House on Wednesday – the first foreign leader to visit Mr Trump since Taoiseach Leo Varadkar’s visit in March.

The meeting comes amid criticism from some Republican legislators about Mr Trump’s decision to withdraw US troops from Germany. There is speculation that some of those troops could be transferred to Poland.

The visit by Mr Duda – his third to the Trump White House – comes days before an election in Poland.