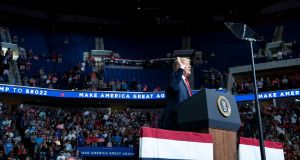 US president Donald Trump will fly to Arizona on Tuesday for one of several campaign events this week, as he aims to kick-start his re-election drive amid poor poll numbers.

Mr Trump plans to deliver a speech and visit the town of Yuma near the US-Mexico border, where he is expected to highlight the completion of a portion of his much-touted border wall.

Immigration was one of Mr Trump’s key themes during the 2016 campaign, and is likely to resurface again as election day nears. His trip comes amid reports that his administration is poised to unveil new immigration restrictions on foreign workers.

Mr Trump will arrive in Arizona three days after his first campaign rally of the season in Tulsa, Oklahoma was undermined by a much smaller crowd attendance than had been forecast.

Amid estimates that fewer than 7,000 supporters showed up to the 19,000-capacity arena, Trump adviser Mercedes Schlapp said that more than 5 million people had watched the event online. White House press secretary Kayleigh McEnany insisted Mr Trump was “very pleased with how the rally went”.

Mr Trump’s visit to Arizona will be his latest trip to a battleground state – Arizona is eyed by Democrats as a possible swing state. Mr Trump will visit the electorally-important state of Wisconsin on Thursday. Though the president won both states in the 2016 election, recent polls show him trailing in them to his likely Democratic rival, Joe Biden.

RIGGED 2020 ELECTION: MILLIONS OF MAIL-IN BALLOTS WILL BE PRINTED BY FOREIGN COUNTRIES, AND OTHERS. IT WILL BE THE SCANDAL OF OUR TIMES!

On Monday Mr Trump renewed his claim that postal voting would lead to election fraud, as several states prepare to expand such voting in November’s presidential election due to the coronavirus.

“Because of MAIL-IN BALLOTS, 2020 will be the most RIGGED Election in our nations history – unless this stupidity is ended,” he said on Twitter. “We voted during World War One & World War Two with no problem, but now they are using Covid in order to cheat by using Mail-Ins!”

The president was also forced to address comments he made in an interview suggesting he could meet Venezuelan leader Nicolás Maduro. His administration has been a backer of opposition leader Juan Guaidó, arguing he is the rightful leader of the South American country.

Mr Trump said he would meet Mr Maduro only “to discuss one thing: a peaceful exit from power,” adding: “Unlike the radical left, I will ALWAYS stand against socialism and with the people of Venezuela. ”

Meanwhile, a highly-anticipated book by Mr Trump’s former national security adviser John Bolton will be released on Tuesday as planned, after the US Department of Justice failed in its legal bid to stop its publication.

In his first public interview since leaving the administration last August, Mr Bolton told ABC News that he did not think Mr Trump was fit for office. “I don’t think he has the competence to carry out the job,” he said.

In the interview broadcast on Sunday night, he also expressed the hope that Mr Trump would be a one-term president. “We can get over one term . . . two terms, I’m more troubled about.”

In a second interview, with NPR, Mr Bolton, who served in the Trump administration for 17 months, also took issue with the president’s handling of the North Korean threat and relationship with dictator Kim Jong-un.

He said the entire two-year effort to engage with North Korea had “ended in diplomatic failure”.

“I think the president had a continued problem in discerning the difference between having a good personal relationship with [China’s leader] Xi Jinping, let’s say, and the US having good relations with China in the sense of advancing American national interest,” Mr Bolton said.