Concern grows over extent of monitoring of protests in US cities 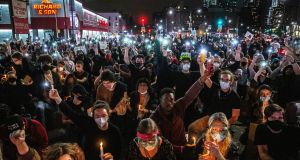 A demonstration against the killing of George Floyd in Minneapolis police custody that was held in New York on June 2nd, and monitored by government drones, helicopters and aircraft. Photograph: Juan Arredondo/New York Times

The Department of Homeland Security deployed helicopters, aircraft and drones over 15 cities where demonstrators gathered to protest the death of George Floyd, logging at least 270 hours of surveillance, far more than previously revealed, according to US customs and border protection data.

The department’s dispatching of unmanned aircraft over protests in Minneapolis last month sparked a congressional inquiry and widespread accusations that the federal agency had infringed on the privacy rights of demonstrators. But that was just one piece of a nationwide operation that deployed resources usually used to patrol the US border for smugglers and illegal crossings. Aircraft filmed demonstrations in Dayton, Ohio; New York City; Buffalo, New York; and Philadelphia, among other cities, sending video footage in real time to control centres managed by Air and Marine Operations, a branch of Customs and Border Protection.

The footage was then fed into a digital network managed by Homeland Security, called “Big Pipe,” which can be accessed by other federal agencies and local police departments for use in future investigations, according to senior officials with air and marine operations.

The revelations come amid a fierce national debate over police tactics and the role that federal law enforcement should play in controlling or monitoring demonstrations. The clearing of demonstrators from Lafayette Park in Washington for a presidential photo op is still under scrutiny. The Air Force inspector general is investigating whether the military improperly used a reconnaissance plane to monitor peaceful protesters in Washington and Minneapolis this month.

Officials at the Customs and Border Protection base rejected any notion that their fleet of aircraft had been misused, either to violate privacy rights or intimidate protesters. “The worst part for me is when we’re made out to be storm troopers,” said David Fulcher, the deputy director for air operations at the National Air Security Operations Center in Grand Forks. “We believe in peaceful protests.” Jay Stanley, a senior policy analyst at the American Civil Liberties Union, said the aircraft could discourage people from protesting. The concern is not only what the border agency is doing with the footage, but how future operations could adapt to technology.

“You see an aircraft, you have no idea currently what technologies that aircraft is carrying,” Stanley said. “There is something militaristic and dominating about a militarised police aircraft hovering over you when you’re out there protesting police abuse.” – New York Times