Polarised Colombia prepares for polls amid lukewarm links with US 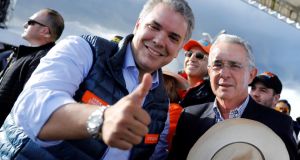 The flower displays are wilting at the Casa de Nariño palace in Bogotá where, after two terms as president, Juan Manuel Santos is in a reflective mood on the divided Colombia he will leave behind after it chooses his successor in elections this weekend.

During his eight years in office, Santos pursued a controversial peace deal with the Marxist Farc guerrilla group, hoping to heal a nation scarred by 60 years of civil conflict. Abroad, that won him a Nobel Peace Prize, but at home critics panned it as a sellout to socialist “Castro-Chavistas”, inflaming old divisions that have now produced a poisonous presidential race.

“It’s been one of my greatest frustrations. I’d have liked Colombia to be more united,” Santos said. “Now I see it more divided . . . Polarisation seems to be a global ill . . . [everywhere] the centre has been weakened.”

Colombia’s election comes at a key moment for the country of 50 million people, which is trying to move on from the decades of conflict that claimed a quarter of a million lives. It faces an influx of about one million refugees from neighbouring Venezuela, plus a lukewarm US administration that has traditionally viewed it as a bulwark against drug traffickers and leftist governments in South America.

“We are supposedly the closest US ally in the region. Supposedly,” says Santos of the Trump administration, which has criticised a US free trade deal with Colombia, withdrawn the public support the Obama government gave the peace process, and panned rising cocaine production. “But you have to be pragmatic. The US does not have a Latin America policy.”

Iván Duque, a young right-wing senator, leads the polls in the presidential contest. Duque is a protege of Álvaro Uribe, the charismatic former president and strongman who fiercely opposed the peace process – a divisive strategy that may yet propel his ward to the presidency.

Polls suggest Duque has about 36 per cent support, not enough to win outright on Sunday but enough to propel him to a June 17th run-off vote, where simulations suggest he would then beat Gustavo Petro, the leftist former mayor of Bogotá, who is second in the polls, or almost any other candidate.

Illustrating the deep divisions in Colombian society, Petro addressed a flag-waving campaign rally in Plaza Bolívar with an anti-establishment tirade, honed in the decades since he was a rebel in the M19 guerrilla movement.

“We are for a new Colombia that pitches liberty against the anachronistic and corrupt!” roared Petro (58). “Colombia’s tired political classes did not make democracy. They made a dictatorship of mafias!” A chant swelled in response: “Petro, amigo; el pueblo está con tigo!” (Petro, buddy; the people are with you!)

At another Bogotá rally, the fresh-faced Duque shouted “We are against populism and for entrepreneurship.” He was flanked by supporters wearing orange T-shirts with the motto “Iván is the man” and, standing nearby, his mentor, Uribe. “But one thing we cannot accept is: continuity.”

Such talk cheers investors. With right-leaning parties controlling about two-thirds of Congress, a Duque presidency should be able to pass a pro-business agenda that includes spending cuts and improved tax collection, while slashing corporate taxes.

But Duque’s market-friendly platform may be giving false comfort to young and upwardly mobile voters who respond well to his relaxed style and decade of experience at the Inter-American Development Bank in Washington.

“All candidates promise to lower taxes but improving revenue with better collection rates is very hard to do,” Santos said.

Many also fear that Duque (41) will be beholden to Uribe as he lacks a power base of his own, having entered Colombian politics only in 2013 to run for a safe senate seat.

“I am not a puppet and Uribe is not a puppeteer,” Duque said recently when accused during a radio interview of being a cipher for the vastly more experienced Uribe, whose family has been accused of links to right-wing paramilitaries.

More centrist candidates may yet prevail, however. Germán Vargas Lleras, the grandson of a former president and Santos’s vice-president, may be able to mobilise his Radical Change party to boost his current 10 per cent standing in the polls.

Another is Sergio Fajardo, a mathematician with a successful record as a former state governor. Although he is third in the polls with 18 per cent, simulations suggest he could win if he makes it to the second round.

The likely outcome of the vote on Sunday, though, is that the centre will be squeezed by the more extreme wings of Colombian politics, leading to a presidency characterised by confrontation and discord. “What is populism?” asked Alvaro Forero Tascón, a columnist in El Espectador newspaper. “It is the phenomenon dominating Colombian politics . . . one on the left, and one on the right.” – Copyright The Financial Times Limited 2018