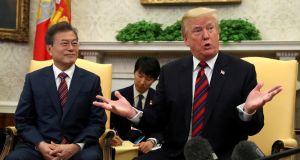 US President Donald Trump gestures as he welcomes South Korea’s President Moon Jae-In in the Oval Office of the White House in Washington. Photograph: REUTERS/Kevin Lamarque

US president Donald Trump has said that the proposed summit with North Korean leader Kim Jong-un may go ahead after all on June 12th.

In comments to reporters as he left Washington DC to attend a commencement ceremony in Annapolis, Mr Trump said the US was talking to North Korea and both sides still wanted to meet.

“It could even be the 12th. We’re talking to them now. They very much want to do it. We’d like to do it. We’re going to see what happens.”

Mr Trump’s comments came a day after he abruptly pulled out of the scheduled summit on June 12th in Singapore, citing North Korea’s “tremendous anger and open hostility”.

In a letter to the North Korean leader, Mr Trump wrote: “The Singapore summit, for the good of both parties, but to the detriment of the world, will not take place.”

But in a conciliatory statement put out overnight North Korea said it was still keen to meet the US president “at any time in any way”.

“We had set in high regards President Trump’s efforts, unprecedented by any other president, to create a historic North Korea-US summit,” North Korean vice foreign minister Kim Kye-gwan was quoted as saying.

Responding to the North Korean statement earlier in the day, Mr Trump tweeted: “Very good news to receive the warm and productive statement from North Korea. We will soon see where it will lead, hopefully to long and enduring prosperity and peace. Only time (and talent) will tell!”

Explaining the surprise decision to cancel the summit on Thursday, a senior White House official said the US had been planning the summit “in good faith”, but that North Korea had left a “trail of broken promises”, including not showing up to a preparatory meeting with US officials in Singapore last week.

Mr Trump considered the matter on Wednesday night, the official said, and made his decision on Thursday morning, dictating the letter to Kim Jong-un word for word.

Earlier on Friday South Korean president Moon Jae-in urged Mr Trump and Kim Jong-un to talk directly to each other.

“Denuclearisation of the Korean peninsula and the establishment of permanent peace are historic tasks that can neither be abandoned nor delayed,” Mr Moon said during an emergency meeting with his top security officials at the presidential office, the Blue House.

Mr Moon said it was “very regrettable” the summit had been cancelled and he was “very perplexed”. He said there may be a problem in the way the two countries were communicating.

“It may be difficult to resolve the sensitive and difficult diplomatic issues through such methods of communication currently being employed,” he was quoted as saying by the Yonhap news agency.

In his letter to Kim Jong-un on Thursday calling off the planned summit, Mr Trump had said: “Sadly, based on the tremendous anger and open hostility displayed in your most recent statement, I feel it would be inappropriate, at this time, to have this long-planned meeting.”

His letter followed comments from a senior North Korean official, Choe Son Hui, in which she described US vice president Mike Pence as a “political dummy” and appeared to threaten the US with nuclear war.

Mr Trump fired back with a warning of his own, telling Mr Kim in his letter: “You talk about your nuclear capabilities, but ours are so massive and powerful that I pray to God they will never have to be used.”

In a statement carried by state media, vice foreign minister Kim Kye-gwan praised Mr Trump’s efforts to bring about dialogue. “We have inwardly highly appreciated President Trump for having made the bold decision, which any other US presidents dared not, and made efforts for such a crucial event as the summit,” he said.

“We even inwardly hoped that what is called [the] ‘Trump formula’ would help clear both sides of their worries and comply with the requirements of our side.” he said, adding that this would have been a wise way of attempting to reach a settlement.

Kim Kye-gwan said Pyongyang was ready to meet the US side “at any time and in any format”.

“As for the tremendous anger and open hostility referred to by President Trump, it is just a reaction to the unbridled remarks made by the US side which has long pressed the DPRK [Democratic People’s Republic of Korea] unilaterally to scrap its nuclear programme ahead of the DPRK-US summit,” he said.

He also said the US side’s unilateral decision was making the North reconsider whether they were right to gone to all the efforts it had made so far and to opt for a new path.

The summit would have been the first time a sitting US president met with a North Korean leader.

Plans for the summit had been placed in doubt since North Korea reacted angrily to comments made first by US national security adviser John Bolton, and the Mr Pence, the vice president.

The two men suggested that North Korea could share the fate of Libya if it did not swiftly surrender its nuclear arsenal. Libyan leader Muammar Gadafy was deposed and murdered by Nato-backed militants after halting his nascent nuclear programme.

Mr Trump had initially sought to placate North Korea, saying that he was not pursuing the “Libya model” in getting the North to abandon its nuclear weapons programme. White House press secretary Sarah Huckabee Sanders also said: “This is the President Trump model. He’s going to run this the way he sees fit.”

Mr Trump’s shock decision to cancel the summit was announced hours after the North Koreans apparently demolished its Punggye-ri nuclear test site in the northeast of the country, in front of a selected group of journalists from Britain, the US, China and Russia, although without the presence of international scientists. – Additional reporting: Reuters