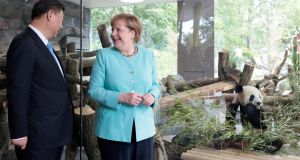 German chancellor Angela Merkel will make her 11th visit to China, and her first since her re-election, on Thursday, for a trip that is sure to be dominated by Donald Trump’s decision to abandon the Iran nuclear deal and knotty trade issues.

It’s likely to be a fraught visit for the chancellor because Germany, like China, is a large exporting nation that runs a hefty trade surplus with the US and has also been the target of tweeted criticism from Mr Trump.

Given that Germany is a major exporter to China, Dr Merkel must balance the need to show solidarity with China on trade with avoiding angering a vital long-time ally in Washington.

At the same time, she will want China and Germany to show a united front on the Iran nuclear deal, which is in danger of disintegrating since Mr Trump abandoned it. Mr Trump’s decision to kill the Iran deal has driven Germany closer to Russia and China on the issue.

Activists hope Dr Merkel raises the issue of Liu Xia, widow of Nobel peace prize-winner Liu Xiaobo, who is kept under house arrest by China and has not been seen in the run-up to the visit. There are signs she has been sent on enforced holiday for the duration of Dr Merkel’s visit.

During previous visits, the German leader, who grew up under a totalitarian regime in East Germany, has produced a list of dissidents in jail and asked of their whereabouts.

Ahead of the visit, Dr Merkel’s spokeswoman, Martina Fietz, said: “Both countries are in agreement that open markets and rules-based world trade are necessary. That’s the main focus of this trip.”

She reiterated this point in her weekly podcast, saying Beijing and Berlin were “both committed to the rules of the [World Trade Organisation]”.

Dr Merkel will be joined by an industry delegation of roughly 20 German executives, and will hold a news conference with premier Li Keqiang before attending a dinner hosted by President Xi Jinping on Thursday night.

During her visit she will travel to Shenzhen in southern China, which is emerging as China’s innovation hub.

German companies are doing well in China. Volkswagen delivered a record-breaking 3.177 million vehicles in China and Hong Kong last year, a rise of 5.9 per cent.

Industry leaders are keen for Dr Merkel to avoid a confrontational stance along the lines of Mr Trump, who has threatened China with billions of dollars in tariffs.

At the same time, Germans are worried about cybersecurity, and the growing role of the Chinese communist party in public life in Germany.