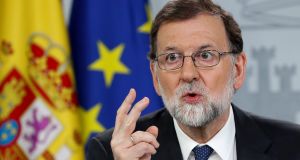 Spanish prime minister Mariano Rajoy: Although he now cuts an isolated and weak figure, the fragmented nature of Spanish politics could yet save him. Photograph: Reuters

Spain’s prime minister Mariano Rajoy is expected to face a parliamentary no-confidence vote in the coming weeks after a court found his Popular Party (PP) guilty of benefitting from a massive corruption ring.

On Friday, the opposition Socialist Party formally requested the vote, the date of which the speaker of Congress must fix next week.

“This morning we have presented a no-confidence motion against Mariano Rajoy in order to recover the dignity of our democracy,” said Socialist leader Pedro Sánchez, who would become prime minister if he won the vote.

The initiative followed a high court sentence on Thursday which found 29 people guilty of involvement in a massive cash-for-contracts network, including several PP politicians.

The PP’s former treasurer, Luis Bárcenas, received a 33-year prison sentence, while the former secretary of the party in Galicia, Pablo Crespo, was given a 37-year sentence.

As well as underlining the PP’s involvement in the scam, the court also confirmed that the party had run a longstanding cash fund, which was run outside official channels and tax controls.

Separately, on Wednesday, a former PP government minister, Eduardo Zaplana, was arrested in connection with the alleged laundering of €10.5 million, which investigators believe he received in bribes as president of the Valencia region between 1995 and 2002.

In the wake of Thursday’s court sentence, the leader of Podemos, Pablo Iglesias, had urged the Socialist Party to present the motion, describing the PP as “a criminal party”. Last June, Mr Iglesias presented his own no-confidence motion against Mr Rajoy, following a series of corruption scandals, but it failed and Podemos is not allowed to present another until a 12-month period has elapsed.

The backing of only Podemos and its parliamentary partner, the United Left (IU), will not be enough for the success of the no-confidence motion, which requires an absolute majority. Although Mr Rajoy now cuts an isolated and weak figure, the fragmented nature of Spanish politics could yet save him.

The centre-right Ciudadanos, which voted in favour of the government’s budget Bill this week, appears to have withdrawn its support for Mr Rajoy in the wake of the corruption sentence, describing the current legislature as “liquidated”.

However, Ciudadanos secretary general José Manuel Villegas said that the party would not support a no-confidence motion that had the backing of Catalan and Basque pro-independence forces or “populists” – an apparent reference to Podemos. Ciudadanos, which is the fourth-biggest party in parliament but is leading many polls, is now lobbying for Mr Rajoy to call elections.

Without Ciudadanos, the Socialist motion would require the support of all the Catalan and Basque nationalist parties in the chamber in order to flourish. That will be a stiff challenge in the current climate, given that the Socialists have been taking an increasingly tough stance against Catalonia’s independence movement recently.

Three no-confidence votes against incumbent prime ministers have been held in Spain’s modern democratic era and all of them failed.

Mr Rajoy hit back at the Socialist initiative, defending the integrity of his government, despite the corruption scandals, and insisting on his intention to see out the legislature, which is due to end in 2020.

“The [no-confidence] motion is the result of nothing other than the political needs of Pedro Sánchez,” he said.