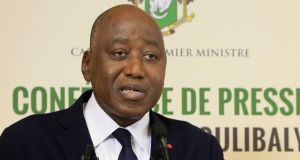 Ivory Coast’s October presidential race has been thrown open by the sudden death last week of the prime minister, the chosen successor of the west African country’s president.

Amadou Gon Coulibaly, who was 61, died after a cabinet meeting on Wednesday, sparking speculation about whether President Alassane Ouattara, who had anointed him the ruling party’s presidential candidate, would renege on his promise not to seek a third term.

Mr Ouattara (78) had for years publicly toyed with the idea of running again before announcing in March that he would step aside, easing tensions that had been rising in the world’s top cocoa-producing nation, nine years after a bloody civil war.

“I pay homage to my younger brother, my son, Amadou Gon Coulibaly, who was, for 30 years, my closest partner,” Mr Ouattara said in a statement announcing Gon Coulibaly’s death. “I salute the memory of a statesman of great loyalty, devotion and love for the homeland.”

Gon Coulibaly had returned just days earlier from a two-month trip to France for medical procedures related to a heart condition. He fell ill after the weekly cabinet meeting and died in hospital later that day.

The prime minister had previously served as a senior aide to Mr Ouattara, and was not considered a high-profile or charismatic politician. Many observers felt choosing Gon Coulibaly, who had been his technical adviser, senior civil servant and agriculture minister, was a way for Mr Ouattara to keep a hand in running the country.

His death leaves a hole at the top of the ruling RHDP party’s ticket, but its “chances of remaining in power after October are unlikely to significantly change” given that “Coulibaly’s status as frontrunner had less to do with his individual appeal than Ouattara’s public backing and RHDP’s dominance in national politics”, Tochi Eni-Kalu, of the Eurasia Group, said in a note.

Among the names being floated as possible successors is Hamed Bakayoko, the charismatic defence minister who had been acting prime minister in Gon Coulibaly’s absence.

A small group of party leaders has discussed pressing Mr Ouattara to pursue a third term, according to Reuters. However, Mr Ouattara is thought to be unlikely to go back on his promise to step aside. Such a move would energise the opposition – principally represented by 86-year-old ex-president Henri Konan Bédié, who announced his run last month – and have a destabilising effect on the country.

Mr Ouattara has been lauded for his economic stewardship, which has seen average GDP growth of 8 per cent annually since 2011, the year he took power.

His decision not to stand again drew praise and came in stark contrast to some other leaders in the region, including Guinea’s Alpha Condé, who have clung to power and pushed past constitutionally-imposed term limits.

Louw Nel, analyst at NKC African Economics, said “volatility was already expected ahead of the elections and Mr Coulibaly’s untimely death will only add to this dynamic”.

The president had said last year that if Mr Bédié or Laurent Gbagbo, another former president, ran he would also reluctantly contest the election. Mr Ouattara beat Mr Gbagbo in the 2010 election, which led to a civil war that killed 3,000 people after Mr Gbagbo refused to concede.

Mr Gbagbo was in January acquitted of crimes against humanity at the International Criminal Court in The Hague for his actions during the war, but he remains in Europe pending the prosecutor’s appeal.

Another potential opposition candidate, Guillame Soro, a former rebel leader who previously served as prime minister, was sentenced in absentia to 20 years in prison for embezzlement, effectively ending his ambitions for October. – Copyright The Financial Times Limited 2020