Over 26,000 people to return to work, according to Department of Social Protection 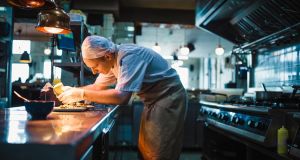 The Department of Social Protection said a further 2,400 employees are returning to accommodation and food service activities. File photograph: Getty

The number of people receiving the Government’s special Covid-19 unemployment payment has fallen below the 500,000 mark, the Department of Social Protection has said.

The department said that over the last week 33,000 people had closed their claim for a payment under the pandemic unemployment scheme. It said that of these, 21,900 would be receiving their last payment on Tuesday. It said 27,600 people had reported that they would be returning to work.

The department said that as the pandemic unemployment payment was paid weekly in arrears, there could be a one-week lag in how closures, due to people returning to work, were reflected in the data.

The department also said that an estimated 400,000 workers employed by more than 60,000 companies or organisations were having their pay supported by the Government under the separate temporary wage subsidy scheme.

In addition there were 225,600 people on the live register as of the end of May.

This means there are about 1.124 million workers relying on State support for all or part of their income.

“Only a few short weeks ago, there were approximately 600,000 receiving the payment so some progress has been made but it is also clear that the return to a new normal will be gradual and incremental. That is why I extended the payment beyond its originally planned life cycle into August. My department will . . . develop a number of options for Government to consider before the scheme’s projected end in August.”