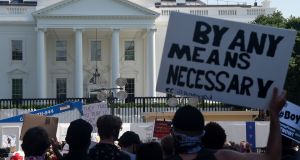 Protesters hold placards in Lafayette Park, across from the White House, to protest against police brutality. Photograph: Olivier Douliery/AFP via Getty 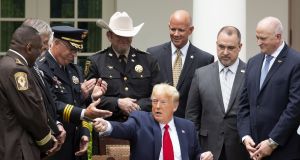 US president Donald Trump after signing an executive order on Safe Policing for Safe Communities in the Rose Garden of the White House in Washington, DC. Photograph: Stefani Reynolds/ CNP/ Bloomberg

Donald Trump faced renewed criticism on Tuesday for what critics said was a “woeful” attempt at police reform that failed to address systemic racism and fell far short of the demands of Black Lives Matter activists seeking fundamental change.

The US president issued an executive order that would discourage police from using chokeholds and create a national database for police misconduct.

But while Mr Trump’s remarks in the White House Rose Garden began with a sombre list of African-Americans killed by police, they soon turned into something resembling a campaign speech, touting the stock market and retail sales, and arguing “school choice” is the civil rights cause of our time.

The president has been scrambling to respond after the death of George Floyd, an African-American killed when a white Minneapolis police officer pressed his knee into his neck for nearly nine minutes. The killing touched off the biggest civil rights uprising for half a century and a moment of national reckoning on racism.

It uses federal government grants to encourage police departments to meet certain standards for use of force, including banning chokeholds – except in cases where an officer is targeted by deadly force. The order also establishes a database for tracking officers with multiple complaints of misconduct and gives incentives to police departments to involve mental health professionals and social workers in issues of addiction, homelessness and mental illness.

Mr Trump said he had met several families who had lost loved ones in deadly encounters with police officers. But the president, who in the past has called on police to rough people up when they are arrested, and who has denounced protesters as “thugs” and “terrorists”, could not resist his instinct to play to his support base.

“I strongly oppose the radical and dangerous efforts to defend, dismantle and dissolve our police departments, especially now when we [have] achieved the lowest recorded crime rates in recent history. Americans know the truth: without police, there is chaos. Without law, there is anarchy.”

There are a “small number of bad police officers”, he added. “They are very tiny. I use the word ‘tiny’. It is a very small percentage. But you have them.”

Democrats condemned the president for lack of ambition. Chuck Schumer, the minority leader in the Senate, said: “Unfortunately, this executive order will not deliver the comprehensive meaningful change and accountability in our nation’s police departments that Americans are demanding.”

Vanita Gupta, president and chief executive of the Leadership Conference on Civil and Human Rights, said: “This executive order is a woeful attempt to shift focus from the dangerous rhetoric and policies he has previously promoted. Piecemeal reform effort will not achieve the transformative change needed to heal our country and usher in a new era of public safety in which all communities thrive.”

Police reform proposals are also emerging in Congress. A Democratic plan would limit legal protections for police and ban chokeholds. A Republican plan, drafted by senator Tim Scott, for a Bill with restrictions on chokeholds and other practices is expected to be announced on Wednesday.

Some cities and states are also moving ahead with changes of their own. Keisha Lance Bottoms, the mayor of Atlanta, pledged to change police use-of-force policies and require that officers receive continuous training in how to de-escalate situations.

The announcement came after the police killing of another African-American man, Rayshard Brooks (27), outside a fast food restaurant on Friday, sparking demonstrations in the city. The restaurant was burned down over the weekend and the officer who shot Mr Brooks was fired.

Ms Bottoms said: “I am often reminded of the words of Dr Martin Luther King Jr. There is a ‘fierce urgency of now’ in our communities. It is clear that we do not have another day, another minute, another hour to waste.”

In Chicago, a panel of residents, activists and one police official will review the police department’s policy on when officers can use force. In Albuquerque, New Mexico, Mayor Tim Keller said he wanted a new department of social workers and civilian professionals to provide another option when someone calls the emergency number 911.

Albuquerque was the scene of violence on Monday night when protesters tried to tear down a bronze statue of a Spanish conquistador outside a museum. A man was shot and taken to hospital in a critical but stable condition near a confrontation between protesters and a group of armed men protecting the statue of Juan de Onate before protesters wrapped a chain around it and began tugging on it while chanting: “Tear it down.”

The city announced that the statue would be removed until officials determine next steps. Statues of Christopher Columbus and Confederate war generals have also been torn down across the nation. A statue of Josephus Daniels, a former newspaper publisher, navy secretary and lifelong white supremacist, was taken down in North Carolina. – Guardian

1 Coronavirus: ‘Midlands lockdown’ on the cards following surge in cases in Kildare, Laois and Offaly
2 Masks Q&A: Who has to wear them in shops and what happens if you don’t?
3 How a ship abandoned by its owner brought deadly cargo to Beirut
4 Ireland's 'R number' of almost 2 a 'serious concern' as number of new cases jumps
5 Covid-19: Public sector workers at home may be asked to foster children
Real news has value SUBSCRIBE