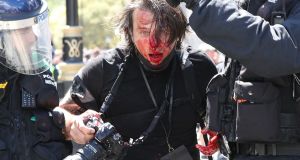 Police escort a photographer outside the Houses of Parliament in London, during a protest which included supporters of the far-right Britain First and Football Lads Alliance. Photograph: Jonathan Brady/PA Wire

Boris Johnson has described unrest in London on Saturday as “racist thuggery” after police arrested 113 people in connection with a violent protest involving right-wing extremists outside the Houses of Parliament.

Among those arrested was a 28-year-old man on suspicion of outraging public decency after a man was photographed urinating next to a monument to PC Keith Palmer on Saturday afternoon. PC Palmer was murdered during a terrorist attack at Westminster in 2017 which killed five people.

“Racist thuggery has no place on our streets. Anyone attacking the police will be met with full force of the law. These marches and protests have been subverted by violence and breach current guidelines. Racism has no part in the UK and we must work together to make that a reality,” Mr Johnson said.

A demonstration on Saturday ostensibly to defend statues and monuments from attack saw protesters attacking the police with bottles and fireworks. Some of the demonstrators, who included supporters of the far-right Britain First and Football Lads Alliance, made Nazi salutes as they confronted police.

Some 23 police officers were injured although none of the injuries are serious, and arrests were made for offences including breach of the peace, violent disorder, assault on officers, possession of an offensive weapon, possession of class A drugs, and being drunk and disorderly.

Black Lives Matter moved a planned demonstration to Friday to avoid a confrontation with the far-right but a small protest was held in Hyde Park and there were some clashes between rival demonstrators. Labour said it could support a government move to make criminal damage to a public monument punishable by 10 years’ imprisonment.

London mayor Sadiq Khan reminded Londoners on Sunday that, despite the demonstrations in the city over the past two weekends, lockdown had not been lifted and urged them to continue to follow social distancing guidance.

“The virus is still out there. I know it’s tough, but please keep following the rules,” he said.

Police in Manchester said that more than 6,000 people defied lockdown rules by attending two raves in the city over the weekend. A 20-year-old man died from a suspected overdose after a party that was attended by about 4,000 people. Some 2,000 people attended a party in another part of the city and police are investigating three stabbings and the rape of an 18-year-old woman.

“These raves were illegal and I condemn them taking place. They were clearly a breach of coronavirus legislation and guidelines, and have had tragic consequences. In Droylsden there are believed to have been around 4,000 people at the peak of the gathering,” assistant chief constable Chris Sykes said.

“Whilst that’s a significant number, there were no reported incidents of further crime but sadly a 20-year-old man passed away from a suspected drug overdose following the gathering and we have specialist officers supporting his family at this time.

“We are also investigating the rape of an 18-year-old woman who attended this event and we have specialist officers supporting her and her family whilst inquiries are ongoing to trace the suspect. Anyone with information is asked to contact police as soon as possible.”

1 Prepare for six to nine months of Covid-19 restraints, warn health officials
2 Speed and distance of Covid-19 droplets tracked by Mater researchers
3 Covid-19: Seventy cases in Cork traced to local pubs and restaurants in recent weeks
4 Government own goals are gifting the initiative to Sinn Féin
5 No joy for consumer with a faulty Husqvana chainsaw
Real news has value SUBSCRIBE