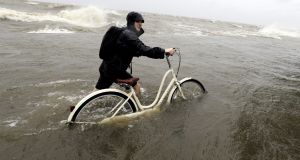 Weakened but still potent, Storm Barry inundated the Gulf Coast but appeared unlikely to deluge New Orleans as it continued its slow advance.

Nevertheless, on Saturday night, governor John Bel Edwards urged residents across south Louisiana to stay “vigilant”, warning that Barry could still cause disastrous flooding across a wide stretch of the Gulf Coast overnight.

“This storm still has a long way to go before it leaves this state,” he said. “Don’t let your guard down.”

New Orleans had been braced for heavy rain on Saturday, but instead had intermittent bands of moderate showers and occasional sunshine.

Though Barry will continue to dump rain throughout the weekend, forecasters downgraded rainfall estimates for the city during Sunday to between 5cm-10cm. Earlier, they said New Orleans could get up to 50cm of rain, raising concerns that water pumps strengthened after Hurricane Katrina would be overwhelmed.

National Weather Service forecaster Robert Ricks warned, however, that it was too early to say for certain that New Orleans was in the clear.

“We’re about at the (halfway) mark of the marathon right now,” he said on Saturday evening.

Heavy rainfall from the storm would be concentrated overnight in a wide area centred around Lafayette, he added. The city is about 193km (120 miles) west of New Orleans.

Late on Saturday night, authorities were trying to rescue a family of five who were trapped by high water in the south Louisiana town of Franklin, according to KTBS-TV.

The National Guard had to halt its initial rescue mission because waters were too high to safely reach the family’s home. Franklin is about 64km (40 miles) south-east of Lafayette.

In other parts of Louisiana on Saturday, Storm Barry flooded highways, forced people to scramble to rooftops and dumped heavy rain, as it made landfall near Intracoastal City, about 257km (160 miles) west of New Orleans. Downpours also lashed coastal Alabama and Mississippi.

After briefly becoming a Category 1 hurricane, the system weakened to a tropical storm, the National Hurricane Centre said. By late Saturday night, its maximum sustained winds had fallen to 80k/h (50m/h).

In Mandeville, a city on the north shore of Lake Pontchartrain across from New Orleans, storm surge and choppy waters sent waves pushing over the seawall and into nearby communities. Dozens of people waded through knee-high water to take a look at the pounding surf.

Nearby, water was covering Lisa Keiffer’s front yard and the road in front of her house.

It was not in danger of going in the house, where Ms Keiffer has lived for 22 years, but she was worried about her nearby business.

She and her husband own The Candy Bank — a sweet shop a few blocks away in the lakefront community.

Earlier on Saturday, the lake’s waters were lapping at the door, forcing her and her husband to scramble to raise everything off the floor.

Elsewhere, coast guard helicopters rescued a dozen people and two pets from flooded areas of Terrebonne Parish, south of New Orleans, some of them from rooftops, a spokeswoman said.

Those rescued included a 77-year-old man who called for help because he had about 1.2m (4ft) of water in his home.

None of the main levees on the Mississippi River failed or were breached, and they were expected to hold up through the storm, Governor Edwards said.

But a levee in Terrebonne Parish was overtopped by water for part of the day, officials said.

Storm Barry was expected to continue weakening and become a tropical depression on Sunday, moving over Arkansas on Sunday night and Monday.

But forecasts showed the storm on a path towards Chicago which would swell the Mississippi River basin with water that must eventually flow south again. – AP