Protesters and police clashed on streets in march against extraditions 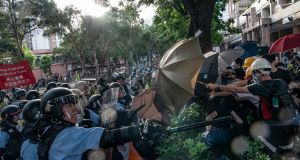 Several thousand demonstrators gathered in the streets of a Hong Kong border town Saturday to protest against mainland Chinese traders, the latest effort by local activists to ride the momentum of recent mass protests in the city.

What began as a peaceful protest Saturday in Sheung Shui, an area of Hong Kong close to the border with mainland China, devolved into clashes between demonstrators armed with umbrellas and police wielding batons, pepper spray and shields. Several protesters were seen being treated for injuries at the scene. The march in Sheung Shui was the latest in a series of demonstrations that have plunged the former British colony into its biggest political crisis since it was returned to Chinese rule in 1997. Opposition to a contentious Bill that would have allowed extraditions to mainland China has drawn hundreds of thousands of protesters into the streets.

This week, Carrie Lam, the city’s embattled leader, said the controversial Bill was “dead,” but she has declined to formally withdraw it. Demonstrators say Ms Lam’s steadfast refusal to completely retract the bill in the face of widespread opposition has undermined public trust in her leadership, fueling growing calls for her resignation. In recent weeks, protesters have also broadened their demands to include a call for greater democratic reforms in the city.

Many of the protesters were residents angry with the vast numbers of “parallel traders” who come across the border from the mainland to buy items like baby formula and diapers for resale at a markup in China to evade import taxes. Local residents say the retail boom has pushed up commercial rents and forced businesses aimed at residents to relocate or close.

In recent weeks, some protesters have voiced concerns that the movement’s growing demands could impact their ability to channel public support and sustain momentum. But on Saturday, several residents said the disparate demands were in fact related to a single issue.

“People say it’s a different issue, one is a local problem, the other is citywide, but the root of it is rather the same,” said Gary Law, 32, who grew up in Sheung Shui. “It’s mostly about China.” – New York Times