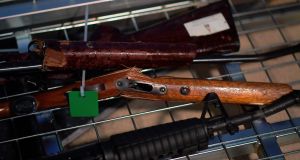 Dozens of New Zealanders handed in their firearms as a gun buyback scheme went into operation aimed at ridding the country of semi-automatic weapons in the wake of the Christchurch mosque attacks. Photograph:Dave Lintott/AFP

Police on Saturday labelled New Zealand’s first firearms buy-back event a success, after 169 individuals handed in 224 prohibited firearms in the city of Christchurch.

It comes four months after the country’s worst peacetime mass shooting, which killed 51 people and injured dozens in attacks on two mosques in the city.

The event was the first of 258 planned until the end of the year, to compensate owners of powerful, but newly banned, semi-automatic weapons following the attacks.

The attitude of firearm owners who participated was “outstanding,” police official Mike Johnson said in a statement.

“They have really engaged in the process here today and we have had positive feedback,” he added.

One gun owner, who sought anonymity, told the New Zealand Herald newspaper he was happy with the €7,710 (NZ$13,000 ) he received for his semi-automatic hunting firearm, despite initial doubts.

“I didn’t think this would be a fair process at all - I wasn’t particularly happy about it. But the outcome was good and they handled it well,” the paper quoted him as saying.

New Zealand’s parliament passed the gun reform law - the first substantial changes to New Zealand’s gun laws in decades - by a vote of 119 to 1 in April.

The new laws bar the circulation and use of most semi-automatic firearms, parts that convert firearms into semi-automatics, magazines over a certain capacity and some shotguns.

With a population of just under 5 million and an estimated total of 1.5 million firearms, New Zealand ranks 17th in the world in terms of civilian firearm ownership, the Small Arms Survey shows. –Reuters