War-torn Libya’s evacuees fret about those left behind

‘We will be evacuated from Libya for good. In a few days my nightmares will end’ 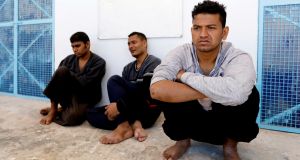 The UN’s refugee agency wants to resettle 2,500 refugees and migrants, currently in Libya, this year, a small percentage of those asking for it. Photograph: Zoubei Souissi/Reuters

Refugees in Libya who were told this week they are to be given passage to Italy have expressed concern for those left behind in detention centres.

One of those selected for removal, Abreha Teame (31), said “I don’t know if I can believe it. Somehow I feel relief.”

Mr Teame messaged The Irish Times last week to say his photograph and fingerprints had been taken and his visa seemed to be finalised, though he didn’t yet know to which country he would be going. “We will be evacuated from Libya for good. In a few days my nightmares will end,” he said.

Mr Teame is a theatre arts graduate from Eritrea. He was one of hundreds of refugees and migrants caught on the frontline of Tripoli’s war after renegade eastern leader Khalifa Haftar ordered his forces to take the capital on April 4th. The detention centre he was in, Qasr bin Ghashir, was in an area of southern Tripoli captured quickly by Gen Haftar’s self-styled Libyan National Army (LNA), though clashes continued.

Hundreds of men, women, and children were left for days without food and water, before an LNA-aligned militia opened fire on them, killing at least three, according to witnesses. Afterwards, most were moved to another detention centre in Zawiya, on Libya’s coast, where detainees accused management of working as smugglers.

Mr Teame has been in Libya for two years. He said his spirit was still with the refugees in detention centres, remembering the “heartbreaking” looks he saw from people he had spent months with after his name was called by United Nations refugee agency (UNHCR) staff.

In April, 146 refugees were moved to Italy from Libya, making Italy the first EU country to take people since the violence in Tripoli began.

“This evacuation is a vital lifeline for people who faced serious threats and dangers inside Libya,” said Filippo Grandi, UN high commissioner for refugees. “It’s now crucial that other states match this gesture and offer similar evacuation places for refugees caught up in the conflict. Turning a blind eye will have real and tragic consequences.”

Many refugees and migrants came to Libya from war-torn countries or dictatorships including Somalia, Sudan and Eritrea, with the hope of reaching Europe. Now, they feel their only options for escape are legal evacuation or crossing the sea. The UNHCR aims to resettle 2,500 refugees and migrants , currently in Libya, this year, a small percentage of those asking for it.

Last week, the Dutch-flagged vessel Sea Watch rescued 65 people off the coast of Libya. All were eventually allowed disembark in Italy, though the ship was impounded by authorities. On its Twitter account, Sea Watch said: “While eyes are now focused on investigations and politics, we are concerned about the people who might be in danger at sea . . . No one knows the real number of deaths in the Mediterranean.

In Libya, Mr Teame said he was worried about those he was leaving behind. “Libya is a country where sunlight is considered as a luxury for refugees in detention centres. [There’s] no food, no water, no medication. In Libya I feel insecure still now. Anything can happen in this country.”