Millionaire couple travel to get vaccine intended for indigenous Canadians 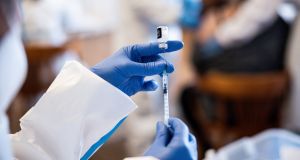 The couple were fined for violating Yukon’s Civil Emergency Measures Act, but local community leaders argue that the fine will mean little to the wealthy couple. Photograph: Akos Stiller/Bloomberg

A millionaire Canadian couple who travelled to a remote community to receive a coronavirus vaccine intended for vulnerable and elderly Indigenous people are facing growing calls for a tougher punishment after they were initially fined $2,300 (€1,480) for breaking public health rules.

Casino executive Rodney Baker and his wife Ekaterina Baker, an actor, travelled by chartered plane to Beaver Creek, a community of 100 in Canada’s Yukon territory, where a mobile team was administering the Moderna vaccine to locals, including elderly members of the White River First Nation.

At the mobile clinic, the Bakers posed as local motel employees to receive the vaccine, officials allege. They were detained at the airport in Whitehorse, the territorial capital, as they traveled home to Vancouver, British Columbia.

The couple were fined for violating Yukon’s Civil Emergency Measures Act, but local community leaders argue that the fine will mean little to the wealthy couple.

“These actions are a blatant display of disrespect and an exemplification of true privilege and entitlement; a selfish millionaire and his wife, stole doses of the vaccine from a vulnerable population, and put an entire community, nation and region at risk,” Assembly of First Nations (AFN) Yukon Regional Chief Kluane Adamek said in a statement.

“This cowardly act should not go unpunished, and authorities should send a message to anyone else trying to commit such a heinous offense that it will not be tolerated.”

Mr Baker resigned this week as head of the Great Canadian Gaming Corporation, which runs racetracks and casinos across the country. According to the Globe and Mail, he made a $45.9 million (€29.6 million) profit on stock options over the past 13 months. He is also expecting a $28 million (€18 million) payday when the sale of Great Canadian to an American buyer is finalized later this year.

But despite growing calls for harsher punishment, it is unclear what further steps lawmakers can take.

In interviews with local media, Yukon lawmakers called for a review of the current rules to ensure they can deter similar behaviour in the future.

Following news of the Bakers’ deception, British Columbia’s ministry of health has said the couple will have to wait for their second dose of the vaccine until their age group is eligible in late summer.

“There is no room in BC’s Covid-19 Immunization plan for people who deliberately put vulnerable populations at risk in order to receive their vaccine before the start of their eligibility group,” the ministry said in a statement. – Guardian