Digital contract between sexual partners replaces passion with ‘too much jurisprudence’ 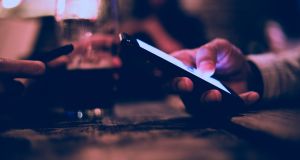 Denmark’s app allows its users to complete a transaction authorising sex. This mutual consent token is valid for one-time sexual intercourse only and expires after 24 hours. Photograph: Getty Images

Danes have responded with surprise and derision to a new app that allows prospective sexual partners to secure mutual consent before taking things further.

Developers of the app, called iConsent, describe it as a practical answer to a new Danish law requiring provable, explicit consent before a sexual act.

With one click of their smartphone, the app’s developers promise users a way to “make digital consent the norm, preventing misunderstanding and abuse”.

The app connects users via their phone numbers and allows them to complete a transaction authorising sex. This mutual consent token is valid for one-time sexual intercourse only and expires after 24 hours. In the background, the app encrypts and stores the digital contract to be recalled later, if needed, as proof of consent.

A commentator at leading Danish daily Politiken said he thought the app was a sarcastic joke, only to learn that the developers were deadly serious.

Other reactions have ranged from “a scandalous misunderstanding” to “pretty nonsensical”. Legal experts have contradicted the app developers, saying it is unlikely their consent “certificate” would stand up in court given the 24-hour window allows time for people to change their mind or try to prove someone has not committed rape.

“It’s finally here,” joked the Berlingske daily, “the app that makes sex as unsexy as a Corona press conference”.

Prof Mikkel Flyverbom of the Copenhagen Business School, and a member of Denmark’s data ethics council, said the app was a prime example of modern societies’ “naive belief in technology”. It perpetuated a “sad view” that reduces human beings and interactions to data and buttons.

For Lene Stavngaard, national head of the Sex and Society group, the app is “definitely not the solution for securing consent”.

“A sexual relationship is not about a contract, so it shoots completely wrong in relation to the needs that are out there,” she said.

Following Sweden in 2018, Danish MPs last month backed a law making sex without explicit consent a criminal offence. Proponents of the new law said it would assist Danish prosecutors who often struggle to prove violence and coercion were used to secure sex.

Sexologist Jesper Bay-Hansen told Danish Radio that turning to an app risked undermining the “skill to read others sexually”.

“I fear we are desexualising our sex life,” he said, “with too little passion and too much jurisprudence.”