A Hungarian border guard, 600 East Germans and a picnic that split the Iron Curtain 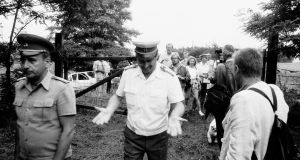 Hungarian border guard officer Arpad Bella (centre) on August 19th, 1989, when more than 600 East Germans pushed their way past his men and into Austria. He chose not to shoot on the crowd and let them pass in one of the landmark moments of the fall of the Iron Curtain. Photograph: Tamás Lobenwein. Courtesy Paneuropean Picnic’ 89 Foundation

It is nearly 30 years since Arpad Bella, then a border guard officer in communist Hungary, made a split-second decision that nudged the course of history in favour of hundreds, and perhaps ultimately millions, of people.

Bella was in charge of a six-man team on the Hungary-Austria frontier near the city of Sopron on August 19th, 1989, when thousands of people called for an end to the cold war at an event dubbed the Pan-European Picnic.

Central Europe was shaking that summer: in June, the newly legalised Solidarity group had won almost every available seat in Poland’s first free elections in more than 40 years, while in Hungary a quarter of a million people had attended the reburial of the leaders of the 1956 uprising against Kremlin domination.

The backdrop was a thaw in the Soviet Union initiated by Mikhail Gorbachev, whose “perestroika” reforms were mirrored in foreign policy by the so-called Sinatra doctrine, which allowed eastern bloc states to do things “their way” without fear of Red Army intervention. But it was still unclear how hardliners in Moscow would react to an existential threat to their communist empire.

In parks and campsites in Budapest and around Lake Balaton, tens of thousands of East Germans had gathered in Hungary – where “goulash communism” was softer than their own brutal police state – in the hope of finding a chink in the Iron Curtain through which they could escape to the West.

Reformist Hungarian prime minister Miklos Nemeth had shut down expensive security systems at the frontier in May, and his foreign minister Gyula Horn and Austrian counterpart Alois Mock had cut a hole in the fence together; but the breach was symbolic, and a strict border regime remained officially in place.

“Nothing really changed in the border guards’ work and the mindset of most of my colleagues stayed the same,” Bella (73) told The Irish Times in Sopron last week.

“Naturally we saw the picnic as potentially problematic. There were so many East Germans in Hungary looking for a way out, and the organisers of the picnic planned to open a border crossing for a few hours so the Hungarian and Austrian delegations could meet. I wondered how we would deal with it, if a situation arose.”

The picnic was arranged by members of the Hungarian Democratic Forum, one of the country’s emerging parties, with the backing of reform-minded communist minister Imre Pozsgay and Otto von Habsburg, the last crown prince of the Austrian empire and a member of the European Parliament.

“We planned to open an old border gate that hadn’t been opened since 1948, and the slogan we put on leaflets for the picnic was ‘Break it and take it’ – we wanted people to cut bits of the border fence and take it away,” recalled Laszlo Magas, one of the chief organisers in Sopron.

“We thought a lot of Hungarians and Austrians would come because everyone hated the Iron Curtain, but we didn’t expect anything to happen with the East Germans.”

The post-war split in Europe scarred Magas’s own life: his artist mother was jailed after trying to flee the harsh repression of post-war Hungary in 1948, when he was just three years old. She finally escaped the country after its doomed revolution in 1956 but he never saw her again and she died in 1981 in Venezuela.

“I wouldn’t say this inspired hatred in me – I was raised by my father’s parents and had a happy childhood. But naturally when the time came I sided with the opposition against the communists, and all this came back to the surface.”

Magas says his first inkling of the picnic’s possible significance came with the arrival in Sopron of a West German television crew a few days before the event, but the organisers – and Bella’s team of border guards – were utterly unprepared for what August 19th would bring.

“The plan was to allow only members of the Hungarian and Austrian delegations pass through the border gate at about 3 o’clock,” Bella recalls.

“But before then I spotted a crowd of people approaching on foot. I thought that perhaps the delegation’s bus had broken down so they were walking instead. But as they got closer I saw they were carrying rucksacks and pushing prams.

“Then I heard shouts from the Austrian side of the border and people in this crowd replying in German – their relatives were waiting for them on the other side!”

Trudging in groups down the road and through the surrounding fields and driving their sputtering Trabants and Wartburgs, hundreds of East Germans were approaching Bella’s post.

“I had just a few moments to decide what to do. If I didn’t stop them I would be in dereliction of duty and could have got five years in a military prison. The procedure was to fire a warning shot, but in that atmosphere it could have provoked panic and violence if the East Germans thought they were being attacked.

“To prevent a catastrophe I decided to let them through. I told my men to turn around and just deal with people coming from Austria. So our border guards calmed down and stamped Austrian passports as the East Germans flooded past us.”

If Bella and his men had opened fire, could any ensuing bloodshed have given hardliners across the communist bloc a pretext to oust reformists and crush hopes of change?

In the event, more than 600 East Germans crossed peacefully into Austria that day, and in September Nemeth opened Hungary’s border to let tens of thousands more head towards West Germany.

East German leader Erich Honecker was ousted that October and the following month the Berlin Wall fell, as from Warsaw to Sofia communism collapsed across central Europe; two years later, the Soviet Union itself would implode.

German chancellor Angela Merkel has been invited to celebrate the anniversary of Pan-European Picnic next week with Hungarian prime minister Viktor Orban, who burst into politics as a pro-democracy activist in 1989.

Orban is now a nationalist firebrand who has compared the European Union to the Soviet Union, maintains good relations with the Kremlin and built fences along Hungary’s southern borders in 2015 to keep out refugees and migrants.

“I think we should not build fences but take them away and destroy them,” says Walburga Habsburg Douglas, who spoke on behalf of her father Otto von Habsburg at the picnic and is a prominent member of the International Pan-Europa Union, an organisation he led for 30 years as a driving force for unification of the continent.

“These pictures of rolls of barbed wire at the border with Serbia hurt me a lot and I thought – ‘How can he do that?’ Now [Orban] is having this anniversary party on his home turf so it will be very interesting to see what he says about all this . . . It’s a very strange time.”

In Sopron, organisers of the picnic approve of Orban’s fence and reject suggestions that his policies betray the spirit of 1989 and its fight for democracy.

“The difference lies in who built the fence, and why,” says Ferenc Ivanics, a member of Orban’s Fidesz party since 1988 and a former deputy.

“In 1989, that fence was a prison and an iron curtain. The fence we have now gives us the protection of our own territory.”

For Laszlo Nagy, a lead organiser of the picnic, this is a time to remember Hungary’s contribution to ending division in Europe, even as Brussels accuses the now proudly illiberal Orban of attacking the EU’s fundamental values.

“Central Europe was like a balloon filled with too much air. It was ready to burst and just needed a pin sticking into it. We provided the pin.”