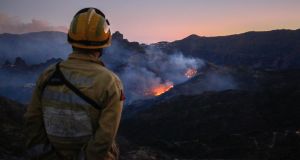 A firefighter observes flames rising from a forest fire near the village of Ayacata in Tejeda on the island of Gran Canaria on Tuesday. Photograph: Getty Images

Authorities in the Canary Islands say that lower temperatures and gentler breezes are providing respite for firefighters trying to tackle Spain’s biggest wildfire of the year.

More than 12,000 hectares (30,000 acres) have been burned in the western slopes of Gran Canaria, an island off north-west Africa popular with European holidaymakers.

Around 10,000 people remain evacuated and more than 1,000 firefighters and emergency workers have been deployed.

Canary Islands president Angel Victor Torres tweeted that the blaze is losing strength and the heart of the island’s main nature reserve of Tamadaba has been spared from the flames.

Only the night before, authorities described the fire as “uncontrollable” and quickly advancing toward the south of the volcanic island. – PA