US blames Iran for oil tanker attacks in Gulf of Oman 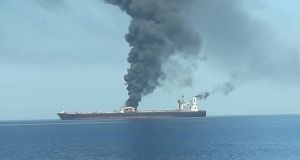 Two oil tankers were severely damaged by attacks in the Gulf of Oman on Thursday that sparked a 4 per cent surge in crude prices and put the energy industry at the centre of rising Middle East tensions.

US secretary of state Mike Pompeo has said the US believes that Iran is responsible for the attacks near the Persian Gulf. Mr Pompeo said at a news conference in Washington that the attacks on the ships are part of a “campaign” of “escalating tension” by Iran and a threat to international peace and security.

He said the United States would defend its forces and interests in the region, but gave no specifics about any plans and he took no questions.

Britain is also working on the basis that Iran is responsible for the attacks, and warned Iran that these actions were “deeply unwise”. “This is deeply worrying and comes at a time of already huge tension,” British foreign secretary Jeremy Hunt said in a statement.

“I have been in contact with [US Secretary of State Mike] Pompeo and, while we will be making our own assessment soberly and carefully, our starting point is obviously to believe our US allies.

“We are taking this extremely seriously and my message to Iran is that if they have been involved it is a deeply unwise escalation which poses a real danger to the prospects of peace and stability in the region.”

Iran says it categorically rejects the “US unfounded claim”.

The US Navy said it was assisting the tankers after receiving distress calls over the Thursday incidents, which forced the evacuation of their crews and heightened fears over the risk of conflict erupting in the region.

The attacks overshadowed a visit to Iran by Shinzo Abe, Japan’s prime minister, who is seeking to ease US-Iran tensions. Mr Abe was meeting the supreme leader Ayatollah Ali Khamenei when reports of the attacks emerged. One of the vessels struck was Japanese-owned.

The incidents, which occurred in waters between Iran and the Arabian peninsula, pushed the price of Brent oil up by as much as 4.5 per cent. Prices slipped back later in the day but remained 2.7 per cent higher, the largest one-day gain since April.

Iranian television showed footage of a fire blazing in a large hole on one vessel, as a tower of black smoke billowed upwards from its scorched hull. No one claimed responsibility for the attacks and it was not clear how they were carried out.

Tensions were already running high between Tehran and Washington, which has been heaping intense pressure on Iran since US president Donald Trump last year withdrew the US from a landmark 2015 nuclear agreement with Tehran.

Oil and transport infrastructure in the Gulf has been struck in a string of assaults since early May, when the US warned of unspecified “escalatory” action by Tehran and sent more military assets to the region. Iranian officials have called the attacks suspicious.

Hamid Baeidinejad, Iran’s ambassador to the UK, said: “Since PM Abe announced his travel to Tehran to consolidate Japanese-Iranian relations and help ease regional tensions, efforts were made, unfortunately, to undermine the goal of the visit.”

After meeting the Japanese leader, Mr Khamenei ruled out any talks with the US, dashing hopes that Tokyo could attempt to mediate between Tehran and Washington. “The Islamic Republic of Iran has no trust in America,” Mr Khamenei said.

The attacks in the Gulf of Oman occurred close to the Strait of Hormuz, one of the world’s busiest shipping routes and a choke point for crude exports out of the oil-rich region.

Helima Croft, a former CIA analyst at RBC Capital Markets, said the attacks undoubtedly raised the risk of a confrontation between the US and Iran. “These are the types of incidents that we have been warning about and that can lead the region to the brink of war,” she said.

António Guterres, UN secretary general, told a meeting of the UN security council: “I strongly condemn any attack against civilian vessels. Facts must be established and responsibilities clarified.”

One of the ships struck was the Kokuka Courageous, which belongs to Tokyo-based Kokuka Sangyo. The company said it had received a report that the vessel was hit by two shells, three hours apart. Company president Yutaka Katada said the ship had been abandoned and was adrift but all the crew were safe.

A company official said: “The first shell hit to the rear of the ship on the port side . . . The second shell then hit port amidships and the captain decided to evacuate.”

The tanker shown in video footage was the Norwegian-owned Front Altair and one message circulating among shipping executives on Thursday said the blaze aboard was caused by a “surface attack”.

The owners of Front Altair said its crew had been rescued unharmed and transferred to an Iranian port by the Iranian navy.

Front Altair was leaving the Gulf after loading at Ruwais in the UAE, while Kokuka Courageous had loaded at Jubail in Saudi Arabia.

The UAE and Saudi Arabia are staunch US allies that support the Trump administration’s efforts to pressure Tehran and push back against Iranian influence in the region.

After the sabotage attacks on four tankers last month, US officials said they suspected Iran was behind them. A UAE investigation stopped short of blaming the Islamic republic, but said a “state actor” was responsible. Tehran has denied any involvement.

“This is very alarming,” said one London-based shipbroker. “After the last incident [in May], in particular, you can see that it is more expensive to insure both cargo and vessels travelling in the region. It is likely this will be even more now.”

Both Iran and the US insist they do not want war. But diplomats fear that the rising tensions could lead to a “miscalculation” that would risk triggering a conflict. – Copyright The Financial Times Limited 2019