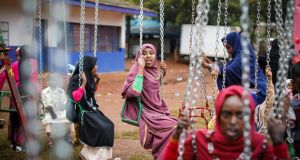 Most rape victims are from poor urban and rural settlements, cannot afford private healthcare and face stigma and discrimination when they seek treatment in public hospitals. Photograph: EPA/Dai Kurokawa

Kenya’s high court ruled, on Wednesday, that rape survivors had the right to an abortion, as it ordered authorities to pay the equivalent of €26,000 in damages to the mother of a teenage victim who died after a botched abortion.

The landmark ruling in a country where abortion is illegal in most cases was in response to a petition filed by the mother, whose daughter – known by her initials JMM to protect her identity – became pregnant after she was raped in 2014 aged 15.

She had a backstreet abortion, leaving her with injuries that eventually led to her death last year.

JMM’s mother, along with the Federation of Women Lawyers, filed a petition in 2015 claiming authorities failed to provide her daughter with proper post-abortion care, and called on the government to implement measures for access to safe abortions.

The court awarded her damages of 3 million Kenyan shillings over poor post-abortion care at a government hospital and said rape survivors should be permitted to have abortions under certain circumstances.

“Pregnancy resulting from rape or defilement, if in the opinion of a trained medical profession poses a danger to life or the health – that is physical, mental and social wellbeing of the mother – may be terminated under ... sections of the constitution,” said Justice Aggrey Muchelule.

Abortion is permitted under the east African nation’s constitution only when a woman’s life or health is in danger and emergency treatment is required.

Campaigners say the policy – along with conservative attitudes that stigmatise abortion in largely Christian Kenya – has driven thousands of women and girls to unregulated clinics run by untrained medical practitioners.

Almost half a million abortions were conducted in Kenya in 2012 – the most recent data available – with one in four women and girls suffering complications such as high fever, sepsis, shock and organ failure, according to health ministry data.

Like JMM, most victims are from poor urban and rural settlements, cannot afford private healthcare and face stigma and discrimination when they seek treatment in public hospitals.

Campaigners say Kenyan authorities – influenced by powerful Christian groups – have in recent years made it harder for women to access safe abortions by withdrawing guidelines on conducting abortions and banning health workers from training.

The high court said the health ministry’s actions had violated the constitution, which guarantees the right to health, life and dignity of women, ordering authorities to reinstate the guidelines and provide health professionals with training.

“JMM’s case is a window into the plight of many other women and girls who have no place to turn, and no access to information or reproductive health services,” said Evelyne Opondo, senior regional director for Africa at the Centre for Reproductive Rights.

The court order would mean health providers would be able to offer abortion and post-abortion care services without the fear of being prosecuted, said Ms Opondo.

JMM’s mother said she hoped thousands of lives would be saved through the implementation of the order. “I know this is what my daughter, JMM, would have wanted to see,” she said in a statement.

“That justice is served, and that Kenyan women and girls in need of emergency health services including abortion, regardless of their social economic status, are able to access safe and legal abortion services.” – Thomson Reuters Foundation