Boy (5) and grandmother die after crossing into country from DRC 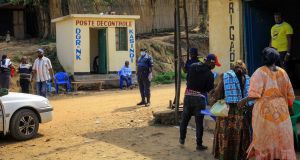 Police operate a checkpoint at the border crossing near Kasindi in eastern Congo on Wednesday. Photograph: Al-hadji Kudra Maliro/AP

The Ugandan government has called on its citizens to report anyone displaying Ebola symptoms, as the second largest outbreak of the disease in recorded history continues.

A five-year-old boy died in western Uganda on Wednesday, after crossing into the country from Democratic Republic of the Congo with his family. His 50-year-old grandmother died shortly afterwards, while his three-year-old brother, who also tested positive, was repatriated to the DRC for treatment.

In a statement, Ugandan minister for health Jane Ruth Aceng said she was concerned about the dissemination of misinformation. “We appeal to the public and malicious individuals to desist from spreading false rumours about the outbreak . . . The outbreak is REAL and we urge all residents of Uganda to remain vigilant.”

At least 1,405 people in the DRC have died since the outbreak began in August last year, more than 1,300 of which were confirmed cases. Less than a third of those who contract Ebola survive it.

On Friday, the World Health Organisation (WHO) is expected to decide whether the outbreak should be designated a public health emergency.

So far, Ebola is mainly confined to rural areas in the DRC, but there are growing fears it will spread to Goma city, close to the Rwandan border.

While waiting for passengers on the side of a bustling street there, motorcycle driver Ramazani Elias told The Irish Times he worried about contracting Ebola from a passenger. “I’m afraid of it, we know it’s dangerous,” he said, before admitting he didn’t know what the signs were. “How can we recognise if someone has it?”

With him was Jonas Baturani, another driver who listed off symptoms including headaches and bleeding, saying he was also frightened of the disease.

Ebola, which was formerly known as Ebola haemorrhagic fever, is spread through bodily fluids. Medical experts advise visitors to avoid human contact as much as possible. Some Congolese aid workers bump elbows instead of shaking hands. It is advised to keep a distance of one to three metres from anyone who may be affected.

Fever, a sore throat, intense weakness, diarrhoea and internal and external bleeding are other signs of Ebola. People who die from it usually suffer multiple organ failure and dehydration.

Goma, like a lot of eastern DRC, is now on high alert. At the entrances to hotels, office blocks and airports your temperature is taken, and those who register above 37.5 degrees are referred as suspected cases, and put in quarantine. People who record a normal temperature have to wash their hands and sometimes the soles of their shoes with chlorinated water.

One of the reasons the outbreak escalated so quickly is a fear of medical workers, with rumours spreading that Ebola isn’t real or was created by foreigners trying to cause Congolese people harm. The main affected areas in DRC are also volatile, with dozens of armed groups operating in them. They are opposition strongholds and locals have little trust in the government .

Nearly 200 health facilities in eastern DRC have been attacked since the outbreak began, with medical workers held hostage and in some cases killed.