Tory leadership candidates: The opium user, the buffoon and more

The Conservative party has had its first vote on a future leader. Six candidates remain 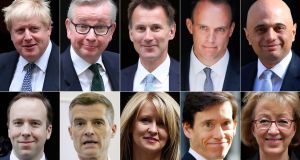 Next door in Britain there’s a fevered contest under way for leadership of the Tory Party and thus Britain. The right-wing Tory Party once presented itself as the pragmatic party of business. Now it’s a radical separatist sect populated by clownish demagogues.

Whoever wins this contest has to appeal to the 120,000 older little Englanders with Tory party membership who wistfully recall the days of village fetes and bowling on the green and tea with vicar and asbestos in the walls and child labour in the chimneys and unrest in the colonies and the gold standard and TB.

And here are the 10 people who promised to make them happy. Thursday’s vote saw three of them eliminated. On Friday, a fourth pulled out.

A haunted-ventriloquist’s dummy who betrayed and renounced Boris Johnson in the last leadership contest, Gove is here to remind us how wonderful Brexit will be with his treacherous wooden hand on the tiller. He was a journalist once, which means, of course, that he is very talented.

In his campaign video, cameras zoom around his pouting Pob-like lips as he speaks slowly about wanting everyone to be “author of their life story” although, typical Tory, he doesn’t go into details on the royalty split.

There are also pictures of Britain to remind us where he lives, and pictures of Jeremy Corbyn to remind Tories of what they fear, and some footage of a man holding his little son’s hand to remind us that that though Gove is not of our flesh he understands human emotions and aspires to be one of us. Well, at least until Geppetto tracks him down and drags him back to his workshop. If I was on his campaign team I’d try the slogan “a velvet Gove cast in iron.”

A serial leadership candidate and one of the Leave-campaign generals who fronted the Brexit attack on the nation’s economy, Leadsom has in the past said that Brexit sceptics are unpatriotic, has exaggerated her financial industry background and has claimed that those without children have no stake in the future.

The latter breaks down as an argument when you look at all the parents who are doing their best to turn their children’s futures into dystopian hellscapes. Ah, feck it I’m a newspaper journalist and I need to be even-handed. One woman’s dystopian hellscape is another’s free-trade Utopia, after all.

Rory Stewart is an elderly child and former opium user and the breakout star of this election cycle. He recently posted a video on Twitter in which, despite it clearly being on a tripod, he pretended to be holding his camera selfie-style.

But seriously, what do people expect from him, a working knowledge of social media mores? His illicit substance of choice was OPIUM, for God’s sake. That’s the pharmacological equivalent of the Imperial System or cucumber sandwiches with the Queen.

Any true Conservative should be encouraging their children to smoke opium. Indeed, in normal times Stewart would be the sort of reasonable compromising conservative who wins contests like this. However, as you’ll know from the scythe-wielding horsemen that rode by your window these are not normal times.

He truly is an attention-seeking buffoon, the type of hesitating, self-deprecating Englishman who charms Americans and populates Richard Curtis films and who will not hesitate to burn the country down if his hands get cold. His campaign video features him promising tame members of the electorate that he’ll leave the EU on October 31st and saying things like “stop and search” and “wealth creator” while they say things like “lawks, master Johnson you’d make as fine a Prime Minister as Pitt the Elder! Praise good Queen Bess! And bless our boys in the Crimea!”

His 1980s-child-star hair cut has been surgically removed and replaced with something more coiffed. But he’s still so unreliable it looks like his own eyes don’t trust his face and are darting around seeking opportunities to escape. You just know that voting for him involves nuclear Armageddon at some point, but sure isn’t that what the Tory rank-and-file want?

Matt Hancock doesn’t just like cricket, he loves it and hence his Twitter feed features footage of him playing cricket inside his office. His facility at indoor cricket demonstrates to me more ability than anyone else in the Tory clown car. Unlike some of the others, it’s unclear what his drug of choice is, but going by his following rhetorical question at a recent press conference, it’s probably acid. “If you could choose what time you would be alive? Wouldn’t you choose now?” he asked, and everyone agreed that they would not.

Hunt presents himself as a reasonable negotiator, a small business owner, a former Remainer turned pragmatic Leaver, the facilitator of peace talks in Yemen and the London Olympics. Yes, he’s a serious man, not like these flibbertigibbets to his left and right. And yet, I still think the best thing he has done is nearly brain a bystander while ringing a bell.

If the Sajid Javid campaign video I just watched is anything to go by he’s a bridge-making Brexiteer who knows how to extricate his nation from the European Union, has a nice family and owns a cute dog. On Twitter he’s going with the hashtag #teamsaj which makes him seem like someone from Love Island but “love” isn’t always the word I’d associate with Javid because I’ve seen him on Question Time. On the other hand, he has a cute dog.

The first thing to know about former works and pensions secretary and one-time TV presenter Esther McVey is that Lorraine Kelly hates her. This could be seen in a recent Good Morning Britain interview when, asked if she remembered working with McVey, Kelly replied with a terse “Yeah, yes I do” before changing the subject. Crivens! How has McVey displeased Lorraine Kelly, one of the few pure things left on God’s earth? And what dark times are these, that Kelly’s displeasure does not automatically rule McVey out of the contest?

McVey does have some things going for her. She runs a girl-empowerment organisation called If Chloe Can, which provides her with a readymade child army to help push her odd beliefs. She believes, for example, that schoolchildren do not need to know of the existence of gay relationships and that leaving the EU without a deal will be just fine.

This sounds like stuff the Tory membership might like. But then you remember that Lorraine Kelly loves each and every one of us, except for Esther McVey. There’s a lot to think about here.

All you really know about former chief whip (can any of these people keep a job?) Mark Harper is that he resigned as immigration minister in 2014 when it was discovered his cleaner didn’t have permission to work in the UK. He’s a Remainer-turned-Brexiteer who believes that some extra negotiation period might be required after October 31st. Given his experience as immigration minister, however, there’s a chance he might leave before October 31st by mistake.

When Dominic Raab was Brexit Secretary he apparently realised for the first time that Britain was an island that needed to import stuff through Dover. “But what of the King’s mole machines in distant Australia?” he cried, “And the Zeppelins from the moon?” Then he resigned his position in protest over the draft withdrawal agreement he helped to negotiate.

Not content with such swivel-eyed loonery, in his campaign video he swivels his whole body, like the girl in The Exorcist, before speaking in a sedated voice about his love of “fairness.”

All the Tories are at this now, shamelessly pretending to care about the common man, when their endgame is actually a deregulated free-trade zone where panda meat is broiled on street by scurvy-inflicted urchins and where safari-ing oligarchs can hunt disobedient Irishmen through the asbestos-lined buildings.

Oh, his campaign video also features footage of a cargo ship, to demonstrate that he knows about the existence of cargo ships now.

Oh, and his neck is roughly the same width as his head, which makes him look like someone has drawn a face on a thumb.

Oh, and if you parse “Dominicraab2019” carefully it reads “Domini Craab 2019” signalling, I think, that Raab is an emissary of the Crab People and that 2019 is the year they will Domin-ate. This is a campaign position as sensible as any others I’ve seen today.