US accuses Iran of positioning for ‘rapid nuclear breakout’ 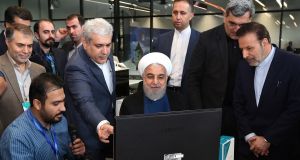 The US has accused Iran of preparing a “rapid nuclear breakout” for resuming enrichment of uranium at its underground Fordow plant beyond limits set by the 2015 nuclear deal.

The United States has already withdrawn from the deal, under which Iran agreed to curb its nuclear activities in return for an easing of international sanctions. The agreement was considered the signature foreign policy achievement of Barack Obama’s presidency, but was repudiated by his successor, Donald Trump.

US secretary of state Mike Pompeo has called on all nations to reject Iran’s “nuclear extortion” and take steps to increase pressure on Tehran to halt “nuclear provocations”.

Iran began its own pressure campaign in May following the ramping up of economic sanctions by the Trump administration which, in breach of the terms of the six-party deal, withdrew in May 2018 and reinstated sanctions.

The latest step is the fourth in Iran’s effort to compel the other signatories of the nuclear agreement – Britain, France, Germany, China and Russia – to meet their commitment to lift economic sanctions in exchange for full Iranian compliance with the terms of the deal.

Their efforts have been fruitless due to US control over transactions in dollars and threats to punish governments and firms violating unilateral US sanctions. These have dramatically reduced Iran’s oil exports, caused the value of its currency to plunge and driven its economy into negative territory.

Iran accuses its remaining partners of failing to make “every effort”, as required by article 28 in the deal, to ensure sanctions relief.

By restarting enrichment at Fordow, which had been converted into a research centre, Iran has committed a fresh violation of the deal. Fordow is banned from producing nuclear material. Another plant, Nantaz was specified as the only facility allowed to enrich uranium.

Iran had previously retreated from commitments under the deal by raising uranium enrichment from 3.67 to 4.5 per cent, the level required for nuclear power plants, exceeding the 300kg limit on its stockpile and employing more modern centrifuges than permitted.

Iran had not intervened in intrusive monitoring by the International Atomic Energy Agency (IAEA) until last Thursday, when an inspector was prevented from entering a facility.

Tehran contends it is acting in accordance with articles 26 and 36 of the deal, which permit suspension of commitments “in whole or in part” if other parties do not honour their obligations.

Iran’s president, Hassan Rouhani, said its breaches of the deal were “reversible if other parties fulfil their commitments. Iran has neither raised the level of enrichment to 20 per cent nor declared its intention of opting for 90 per cent required for making weapons. The Arak reactor – also meant to be converted into a research facility – has not been reactivated.

Russian foreign minister Sergei Lavrov expressed concern over Iran’s actions but criticised European governments for demanding that Iran fulfil all of its obligations under the deal, while “not giving anything in return”. Russia regards the US sanctions on Iran as illegal.

French president Emmanuel Macron, who has attempted to rescue the deal, stated, “I think that for the first time, Iran has decided in an explicit and blunt manner to leave the [agreement].”