Artillery and aerial bombardment kill 1,600 in eastern Ghouta over the past five weeks 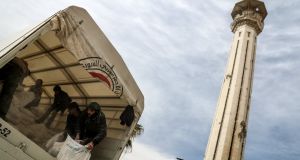 Workers unload an aid truck that was part of a humanitarian convoy that arrived in Douma, Syria, earlier this month. Photograph: Mohammed Badra/EPA

UN relief agencies have launched an emergency appeal for $150 million (€122 million) to provide food, medical care and shelter for more than 260,000 Syrians who have been driven from their homes by offensives conducted by the Syrian army east of Damascus, and Turkish forces in the northwest canton of Afrin.

Only 6 per cent of the UN appeal for an overall $2.5 billion to meet the needs of Syria’s internally displaced has been raised. Some 5.6 million Syrians need humanitarian assistance.

Since March 9th, 80,000 people have fled eastern Ghouta, according to UN humanitarian co-ordinator Ali al-Za’atari, where government forces have routed thousands of radical fundamentalist fighters who held the region since 2013 and sporadically invaded and shelled the capital.

Artillery fire and aerial bombardment killed an estimated 1,600 fighters and civilians over the past five weeks, while dozens of civilians have died in Damascus. Mr Za’atari said 50,000 displaced people are living in shelters, while 26,000 have found refuge with relatives, in rentals, or returned home.

According to the UN, 6,000 fighters and their families have been evacuated from eastern Ghouta to Idlib province in the northwest. That province is controlled by al-Qaeda’s Hay’at al-Tahrir and other jihadi factions; 70,000-78,000 people remain besieged in Douma, the region’s main city.

Civilians have lived with fighters in unhygienic conditions and suffered a lack of food, water and medical treatment. Some 620 evacuees have been hospitalised. Having visited Douma twice during this crisis, Mr Za’atari said there was malnutrition due to shortages and high prices of essential foods.

Conditions are even more dire in in the north, he said, where some 183,000 mainly Kurdish civilians have sought sanctuary from Turkey’s occupation of the Afrin enclave.

The small towns of Tel Rifaat, Nabul and Zahraa cannot sustain the influx of displaced families, who need to be moved to Aleppo city to receive humanitarian assistance and medical treatment.

About 50-70,000 people are estimated to remain in Afrin. Khaled Hboubati, head of the Syrian Arab Red Crescent (Sarc), said its volunteers have been on duty 24 hours a day to deal with the flow of internally displaced people over the past 10 days.

Sarc, the local partner for the International Committee of the Red Cross (ICRC), seeks to restore essential services, remove debris and conduct supply convoys in areas returning to government control. Shelter and hygiene are given priority.

Sarc has no access to Turkish-occupied Afrin, where the Turkish Red Crescent is providing humanitarian assistance.

Mr Hboubati said all the US agencies and the ICRC have been working together to alleviate the suffering of the displaced. “We cannot respond without their assistance,” he said.

The number of people involved is being disputed. The Russian military reported that 120,000 civilians had left eastern Ghouta, while monitors suggested more than 25,000 fighters and families have been evacuated from the region. The UN admits its figures are estimates.