Catalan politician Clara Ponsatí hands herself in to Scottish authorities 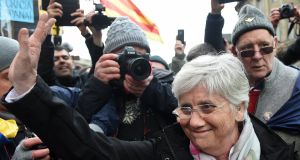 Pro-independence parties in Catalonia’s parliament defied the Spanish judiciary on Wednesday by approving a motion asserting the right of Carles Puigdemont to become president of the region, despite being in prison in Germany where he is awaiting the result of an extradition request.

The purely symbolic initiative received the support of Mr Puigdemont’s Together for Catalonia (JxCat), the Catalan Republican Left (ERC) and the Popular Unity Candidacy (CUP). The motion stated that Jordi Sànchez and Jordi Turull were also legitimate candidates to lead the region. The Spanish courts have prevented all three men from attempting to become Catalan president recently, each time citing their legal status.

“We will not give up on Puigdemont’s candidacy,” Gemma Geis, of JxCat, told the chamber. “We represent his electoral list, we will do everything possible to defend his legitimacy to become president.”

In December, pro-independence parties won a narrow majority in a regional election called by the Spanish government, which had introduced direct rule in Catalonia in the autumn. However, the secessionists’ failure to present a candidate deemed acceptable to the Spanish government and judiciary has prevented the formation of a new regional administration.

The pro-independence parties’ motion on Wednesday backing their chosen candidates was roundly criticised by the Spanish government, as was a second motion calling for the release of jailed independence leaders.

Rafael Hernando, of the governing Popular Party (PP), called on the regional parliament to “concern itself with the problems of Catalans and not those of criminals who will have to face justice”.

Last week, the supreme court formalised charges of rebellion against 13 Catalan politicians for their role in last October’s failed independence bid, jailing five of them. In addition, it issued a European arrest warrant against Mr Puigdemont, who was detained in northern Germany on Sunday and is now waiting for a judge to decide whether to extradite him.

A total of seven secessionist Catalan politicians are in prison in Spain while another seven have fled abroad.

The most recent swathe of arrests sparked massive demonstrations in Catalonia on Sunday and threatening messages were painted on the road outside the home of supreme court judge Pablo Llarena.

The animosity was also visible in the regional parliament on Wednesday. The unionist Ciudadanos party responded to the pro-independence initiatives by presenting a motion calling for the resignation of the parliamentary speaker, Roger Torrent, which was rejected.

Also on Wednesday, Mr Puigdemont’s former education minister, Clara Ponsatí, handed herself in to police in Edinburgh. Ms Ponsatí had fled to Belgium with Mr Puigdemont last autumn, before taking up an academic post at the University of St Andrews. She was released on bail and has promised to fight Spain’s efforts to extradite her on charges of rebellion and misuse of public funds.

“She does not believe that the Spanish courts can guarantee independence, human rights or justice,” her lawyer, Aamer Anwar said. “Clara remains defiant, resolute and is determined to fight back.”

Scotland’s first minister, Nicola Sturgeon, has expressed her opposition to the extradition request, although she said she could not prevent it from being processed.

The increasing legal pressure has exposed differences at the top level of the independence movement. At least some factions within Mr Puigdemont’s JxCat want to push ahead with a plan to hold an investiture session for him, despite the fact the constitutional court has already forbidden him from taking part in such a ceremony from afar. The anti-capitalist CUP supports that plan, but the ERC appears more intent on avoiding further legal hurdles and forming a government before a late-May deadline triggers new elections.

In a bid to prevent that, the leftist In Common We Can (ECP) coalition has proposed the formation of a “government of independents”, made up of figures removed from everyday politics.