Turkey the powerbroker in Syrian struggle 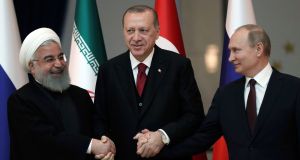 Turkey has emerged as a major player in the Syrian crisis, but trust in the Ankara government is in short supply.

Damascus, Moscow and Tehran do not trust Turkey although Wednesday’s summit in Ankara of the presidents of Turkey, Russia and Iran proclaimed fealty to the sovereignty and territorial integrity of Syria and pledged to continue efforts to end the war and to achieve a political settlement.

In spite of this show of tripartite unity, a senior Syrian source told The Irish Times “Nobody trusts [Recep Tayyip] Erdogan but nobody can do without him.” This is why the Turkish president can play the role he has assumed for this phase of the seven-year Syrian conflict, the source said.

The source concluded by saying Erdogan plans to employ his paramilitary and territorial assets to ensure the Ankara-backed political and armed opposition will have a say in Syria’s future polity and constitution.

Erdogan has made no secret of his intention of empowering Syria’s Muslim Brotherhood, an offshoot of the 90-year old Egyptian brotherhood which is the model for Turkey’s fundamentalist ruling Justice and Development party.

During a meeting with Syrian president Bashar al-Assad several years before the war, Erdogan urged him to lift the country’s constitutional ban on parties based on religion, ethnicity, and gender.

Since the government had fought a brutal battle with the brotherhood from 1976-82, Assad refused. Erdogan responded in mid-2011, four months after protests began in Syria, by establishing the Free Syrian Army and the brotherhood-dominated Syrian National Council, and funnelling foreign fighters into Syria with the aim of transforming the secular state into an Islamic entity.

Erdogan has declared his intention of ordering his forces to advance eastwards to seize the town of Manbij, held by Syrian Kurdish fighters and US troops since 2016, and drive the Kurds from northern Raqqa and Deir al-Zor provinces captured by them last year.

He is determined to eject US-backed Syrian Kurdish forces from Turkey’s 900km border with Syria, claiming they are allied with Turkey’s irredentist Kurds. This campaign serves as cover for Erdogan’s territorial ambitions in Syria and Iraq, former possessions of the Ottoman Empire, and his effort to make Turkey the leading power in the region and the wider Muslim world, rivalling Saudi Arabia and Iran.

To boost his bid for re-election next year, he has exploited widespread popular anti-US and anti-western sentiments and earned credit among nationalists for his military campaign against the Syrian Kurds and the Afrin victory.

Damascus, Moscow and Tehran are vehemently opposed to the creation in northern Syria of a Turkish-occupied zone, which provides a base for fighters from al-Qaeda’s Hay’at Tahrir al-Sham (formerly Jabhat al-Nusra), Ahrar al-Sham, Faylaq al-Rahman and other radical fundamentalist factions.

Last week Erdogan increased the number of fighters under his control by inviting jihadis from Saudi-sponsored Jaish al-Islam to settle in the Turkish-occupied enclave around the northern town of Jarablus.

The US, its Arab allies, and Europe may soon recognise Turkey’s co-option of jihadi groups as a major threat to regional and global security but they, like Russia and Iran, are reluctant to alienate Erdogan because Turkey, however errant, remains a strategic bastion against Russian and Iranian expansion.

While Erdogan’s intentions are well known, US President Donald Trump remains a wild card. Last week he called for an immediate withdrawal of 2,000 US troops embedded with Kurdish forces in northern and eastern Syria but 24 hours later, under pressure from his military advisers, he agreed the troops could stay long enough to mop up pockets of Islamic State fighters and stabilise the vast stretch of territory held by the Kurds.

Mr Trump said he could support the US deployment for months rather than years – but he could change his mind at any moment.

If the US contingent is withdrawn without a deal to restrain Ankara, Turkish forces could, without challenging the US military, occupy the area the Syrian Kurds hold, enabling Erdogan to realise his neo-Ottoman ambition to restore to Turkey territory lost in the post-first World War regional carve-up by Britain and France.

Having invested blood and treasure to preserve the Syrian state and their own regional interests, Russia and Iran could be compelled to intervene, risking conflict with Ankara’s Nato partners which are obliged to defend Turkey in case of attack by non-Nato powers.