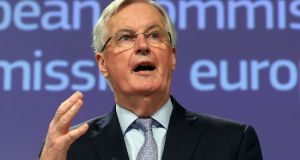 Michel Barnier: “An agreement is possible, even if difficult,” he said in Brussels. Photograph: Francois Walschaerts/AFP via Getty Images

It will be tough to reach a deal between the European Union and Britain to govern their post-Brexit relationship but it can be done, negotiators said after the first round of talks concluded on Thursday.

“To be completely frank with you there are many divergences ... and they are very serious divergences,” said the EU’s chief negotiator Michel Barnier. “I think, sincerely, that the agreement is possible, even if difficult.”

A UK official close to the talks said the sides were far apart on issues of fishing rights, on what governance system could resolve disputes, and on the so-called level playing field.

“Basically it’s going to be tough but it’s just the first round. Overall it was constructive,” said the UK official. “Our vision is of a trade relationship between sovereign equals.”

Mr Barnier stressed that irrespective of whether a deal was reached, Britain’s decision to leave the single market and customs union meant that big changes lay ahead for trade on January 1st, 2021. All goods imported or exported between the EU and Britain would be subject to customs formalities, UK financial firms would lose their passporting rights to sell across the EU, and UK certification of goods would no longer be valid in the bloc.

“It will not be business as usual ... it will be very very different,” Mr Barnier said. “The difficulties that will be linked to that, my impression is that they are still very often underestimated.”

Britain hopes to achieve a free-trade deal with the European Union that allows it to export easily into the world’s largest economic bloc.

The EU says free access to its single market can only be granted if the UK aligns with EU norms, in order to avoid giving its companies an unfair competitive advantage, something Britain has rejected since agreeing to it in principle last year.

Prime minister Boris Johnson’s government now argues that diverging from EU norms, or at least the freedom to do so, is the entire point of Brexit. This rules out the close trade relationship pursued by his predecessor Theresa May.

Mr Johnson secured Britain’s leeway to sharply diverge from EU norms in the withdrawal agreement of last year, which guaranteed Northern Ireland would remain in line with the EU as a default, in order to avoid a land border.

This entails that checks and customs formalities will take place between Northern Ireland and Britain.

The EU has made the future relationship agreement contingent on the implementation of that deal, and chief UK negotiator David Frost has assured Brussels that Britain will uphold its commitments.

The practicalities of what this means for trade between Northern Ireland and Britain is to be studied by a joint EU-UK committee, which will meet for the first time on March 30th.

Businesses in the North, which are strongly reliant on easy trade both across the sea with Britain and with the Republic, have appealed for clarity on what the arrangements will be.

“Business likes certainty and at the moment we don’t have that,” said Aodhán Connolly, director of the Northern Ireland Retail Consortium. “It needs to be something that’s deliverable in the nine months we have available.”

Britain is in a transitional arrangement until December 31st, continuing to follow prior norms. There will be four more rounds of negotiations in Brussels and London before May.

UK negotiators say if they judge insufficient progress has been made by June, they will abandon talks to prepare for a no deal scenario. In that case, World Trade Organisation default tarriffs would apply to imports and exports between the EU and UK from January 1st, delivering an even greater jolt to trade than if a deal is reached.

1 Trump turns to bible for photo op as DC burns around him
2 Covid-19: Easing of restrictions ‘unlikely’ to be speeded-up
3 ‘Frustrated and angry’: Thousands march in Dublin to protest death of George Floyd
4 Coronavirus: One more death in Republic as expert warns house parties are ‘disaster’ for containment
5 Couple injured in shooting incident at farm in Co Waterford
Real news has value SUBSCRIBE