Senator has yet to endorse any other candidate for Democratic nomination 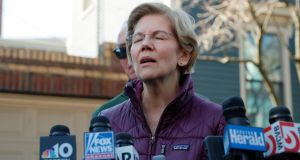 Senator Elizabeth Warren talks to reporters outside her house about the end of her 2020 campaign for the US presidency in Cambridge, Massachusetts. Photograph: Brian Snyder/Reuters

Massachusetts senator Elizabeth Warren pulled out of the US presidential race on Thursday but declined to endorse a candidate for the Democratic nomination, leaving unanswered questions about the impact of her departure on the tightening contest.

Ms Warren, who declared her candidacy more than a year ago, said it had been the “honour of a lifetime” to run for president, and she had “no regrets at all”. Speaking outside her home in Cambridge, Massachusetts, an emotional Ms Warren thanked “every single person who tried on a new idea, every single person just moved a little in their notion of what a president of the United States should look like”.

With Vermont senator Bernie Sanders and former vice-president Joe Biden now the frontrunners, the news of Ms Warren’s departure was not unexpected. Despite polling strongly at several points last year – peaking in early autumn when she led some polls – she failed to capitalise on her impressive policy experience and personal appeal, particularly to white college-educated women.

The senator had not won a single primary contest, and her third-place finish in Massachusetts and fourth-place position in her native Oklahoma on Super Tuesday were seen as fatal blows to her candidacy.

Ms Warren’s exit from the race means that Tulsi Gabbard, the congresswoman from Hawaii, is the only woman candidate remaining.

Asked about the role of gender in the campaign, Ms Warren said it was a “trap question” for any woman candidate. “If you say, ‘Yeah, there was sexism in this race’, everyone says, ‘Whiner’. If you say, ‘No, there was no sexism, about a bazillion women think, ‘What planet do you live on?’” She implied that she would address the question further in the coming days, adding that little girls would have to wait “four more years” to see another woman candidate for president.

Ms Warren said she had not made a decision on whether to endorse another candidate.

“Let’s take a deep breath and spend a little time on that,” she said. “We don’t have to decide right this minute.”

Though Ms Warren shares much ideological ground with Mr Sanders, particularly in the field of healthcare and the need to challenge big corporations, an endorsement for Mr Sanders is by no means certain. Polling suggests Mr Sanders does not necessarily appeal to many of Ms Warren’s supporters, particularly women.

The two senators also clashed earlier this year amid reports that Mr Sanders told Ms Warren during a private meeting that he felt American voters would not vote for a woman, a comment Mr Sanders disputes.

Nonetheless, there were some calls from prominent Sanders supporters for Ms Warren to back her former rival. Though she did not mention Ms Warren directly, Minnesota congresswoman Ilhan Omar said in a tweet that progressives should unite behind one candidate, just as the moderate wing of the party had done behind Joe Biden.

The former vice-president won 10 out of the 14 states which held their primaries on Tuesday, boosted in part by a surge in support from former rivals.

Ms Warren was the latest in a string of candidates to suspend their campaigns this week, following former New York mayor Mike Bloomberg’s exit on Wednesday, and the withdrawal earlier in the week of former South Bend, Indiana mayor Pete Buttigieg and Minnesota senator Amy Klobuchar.

The Biden campaign announced that Ms Klobuchar would campaign for him in Michigan on Friday and Saturday. Mr Sanders has cancelled plans for a campaign event in Mississippi – one of four states holding primaries next Tuesday – and instead has expanded his campaign programming in Michigan.

Mr Biden continued to secure several endorsements from senior Democratic party figures on Thursday, including from the governors of Kansas and Michigan.