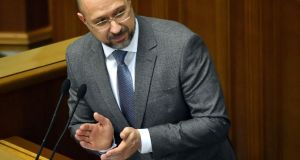 Ukraine’s parliament has approved a new prime minister at the request of president Volodymyr Zelenskiy, as the former comedian tries to accelerate reforms, revive his flagging popularity and quash criticism that he is out of his political depth.

Deputies voted on Wednesday to remove incumbent premier Oleksiy Honcharuk (35) after six months in office and replace him with Denis Shmygal (44), a deputy prime minister and former regional governor.

Mr Shmygal said he would continue efforts to modernise the economy, public services and the military, and pledged to rejig the 2020 budget to raise state wages and pensions, as Ukraine enters its seventh year of conflict with Russia.

Critics questioned the handling and logic of the shake-up, and asked why Mr Shmygal and his proposed ministers were preferable to their predecessors, many of whom were replaced on Wednesday along with Mr Honcharuk.

Ukraine’s reform watchdogs expressed concern over the appointment of ministers with links to wealthy oligarchs and the political “old guard”, while Kiev’s western allies kept a close eye on a motion that parliament was debating on Wednesday night, to replace prosecutor general Ruslan Ryaboshapka.

Analysts said the removal of Mr Ryaboshapka – who is generally well regarded by anti-corruption experts and US and EU officials – would send a worrying signal that Mr Zelenskiy and his team were not committed to ending graft, impunity and oligarchs’ long domination of politics and business in Ukraine.

Mr Zelenskiy said Mr Honcharuk’s government had failed to halt falling industrial production and communicated poorly with the public, and he argued that its honest disposition and limited progress with reforms were “not enough for Ukrainians”.

“To not steal is not enough. It’s a government of new faces, but it’s not enough to be [new] faces. New brains and hearts are needed,” he told parliament.

“I really think that the outgoing government did everything possible, but today Ukrainians need a government to do the impossible. I hope that’s what the next cabinet will be . . . I believe that finally there will be a government for the people.”

One of those to lose her job was health minister Zoryana Skaletska, who has gone into voluntary quarantine with Ukrainians evacuated from China to reassure the public about the government’s response to the coronavirus crisis.

“Thank you for your courage. But in our medical system, courage can’t be a one-off act,” Mr Zelenskiy said to her.

Relations between Mr Honcharuk and Mr Zelenskiy have been strained since a recording was leaked last month of the premier telling officials that the president had only a “primitive” understanding of economic affairs.

Ukrainian media quoted sources close to Mr Honcharuk as saying his government’s fate was sealed when he ordered an ally of oligarch Ihor Kolomoisky to be replaced as the top manager of a major power company. The billionaire oligarch denies meddling in politics.