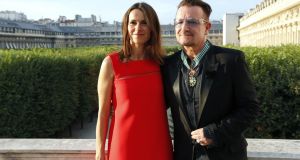 Writer and lecturer Aurélie Filippetti with Bono, who was made a “commander of arts and letters” during her tenure as François Hollande’s culture minister. Photograph: Francois Guillot/AFP/Getty

While waiters at the Senate restaurant hovered over Aurélie Filippetti, calling the former culture minister madame la ministre, the Socialist Party was moving the last cardboard boxes out of its historic headquarters in the rue de Solférino. The bankrupt party has had to sell the building, for €45.5 million.

Filippetti relished the coincidence. Here she was, lunching with the European Press Club and talking about her new novel, exactly a year after the Socialists suspended her membership for having supported a dissident Socialist in a byelection. “I told them where to go,” she says. “I think this party is dead. It must die so that something else can be reborn. It has no ideological backbone and no supporters. It’s an empty shell.”

Filippetti (45) is the granddaughter of Italian immigrants and the daughter of a Communist coalminer. She was a Green for seven years, then a Socialist for nine years. She resigned as François Hollande’s culture minister in August 2014, when her then partner Arnaud Montebourg quit as minister for the economy.

People are going to get fed up with cynicism, materialism and individualism

They felt Hollande had betrayed Socialist values of justice and solidarity. “For my part, I choose loyalty to my ideals,” Filippetti wrote in her resignation letter.

Filippetti’s third novel, Ideals, is an autobiographical “political love story” about an affair between a left-wing female politician and a right-wing male colleague. It is also a scathing portrayal of the Sarkozy and Hollande presidencies, which she describes as “a double failure that led to the collapse of the system”. Hollande’s “apparent bonhomie . . . hides a powerful superiority complex,” she writes.

Filippetti holds a doctorate in literature and teaches at the political science institute Sciences Po, in Paris and in Nancy. Her students include German youths and refugees. She defines her politics as “social democratic ecologist” and believes there is a “democratic space” for a revival.

“Ethics and idealism are more necessary than ever. People are going to get fed up with cynicism, materialism and individualism. I continue to believe deeply in ecology, social justice and feminism,” she says.

Filippetti is more bitter towards Hollande than President Emmanuel Macron. French media and the opposition appear hell-bent on destroying the young president. “I want him to succeed,” she says, admitting that if he fails, left- or right-wing extremists are the only alternative, at least for the time being.

Yet Filippetti faults what she calls Macron’s “autocratic” ways. His desire to choose the next prosecutor general of the republic is a violation of the separation of powers, she says. And she’s fed up with government promises to communicate and better explain policies.

“When people don’t agree with what they’re doing, they assume people are too stupid to understand. The énarques [graduates of the elite civil service college ENA], have never been more powerful. Macron is running the country with six or seven people . . . Technocracy has won.”

Filippetti fears that “all this talk about nasty populists” will help extremists in next May’s European elections. “It galvanises them,” she says. “Except for Spain and Portugal, there aren’t any progressive governments left in Europe. ”

Populism is the flip side of elitism, Filippetti argues. “The elite run France as if they were not accountable to people. They say, ‘We’re going to govern for the good of the people,’ without asking their opinion. People feel they are not represented, so they don’t vote. It’s very dangerous, because at the end of the day, the extreme right can win.”

Europe has failed abysmally on immigration, Filipetti says. “Migrants should be able to apply for asylum in the country of their choice. The Dublin convention [which requires them to apply in the first EU country they enter] is a moral defeat. So is subcontracting control of migrants to Turkey. The wars in Syria and Libya were caused by our mistakes, and faced with that we renounce humanist ideals.”

As culture minister, Filippetti made Bono a commander of arts and letters. Her face lights up when I mention the Irish rock star. “We decorate foreign artistes who contribute to world culture. Bono is someone I adore, as an artiste and as an homme engagé. Every time he comes to Paris, he invites me to his concerts, and every time I go.”