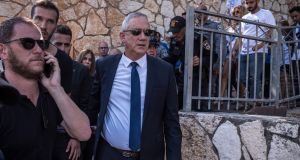 The prospect of Israelis going to the polls for the third time in less than a year has grown after negotiations between Likud and Blue and White ended in mutual recriminations on Friday.

On Wednesday, president Reuven Rivlin tasked prime minister Binyamin Netanyahu with forming his fifth government following inconclusive elections earlier this month, the second this year, which left both of the two big parties without a working majority.

Mr Netanyahu’s best chance is to form a unity government between his own Likud party, which won 32 seats in the 120-seat Knesset parliament, and the centrist Blue and White, led by former top general Benny Gantz, with 33 seats.

However, two main obstacles stand in the way of a unity government: the fact that Mr Netanyahu is facing serious corruption allegations and his insistence that any coalition must include all the right-wing and religious parties traditionally allied with the Likud, representing a bloc of 55 Knesset members.

Although the two parties agreed to hold more talks on Sunday, Friday’s meeting ended with the two parties issuing statements in which they both complained that the other party did not want to talk about what really mattered and focused instead on issues that are irrelevant.

The Likud complained that Blue and White did not respond to their request that the basis for the talks be a compromise proposal presented by Mr Rivlin under which Mr Netanyahu serves as prime minister first under a rotating premiership but will suspend himself indefinitely if indicted on criminal charges.

A Blue and White spokeswoman said the Likud liked Mr Rivlin’s plan because it would let Mr Netanyahu start off as prime minister, but said Likud refused to discuss the party’s demand for a liberal, secular coalition, and instead continued to insist on negotiating as a bloc.

Likud energy minister Yuval Steinitz warned that tensions between Iran and the US were reaching breaking point and a unity government deal was imperative to face such a scenario.

“We are on the verge of the Iran situation blowing up,” he warned. “If it happens it is liable to reach us too – this is something that is very, very tangible and realistic.”

With opinion polls showing that most Israelis support the formation of a unity government and do not want yet another election, the blame game is under way with both main parties warning that intransigence from the other side is pushing a winter election closer.

Likud negotiator, minister Ze’ev Elkin, said it was clear the public wanted unity, but insisted the Likud would not split up the right-wing and religious bloc.

“If we are not successful in this process, whoever thwarts it will be taking the country to a third election.”

On Wednesday, Mr Netanyahu will face a pre-trial hearing in three separate corruption cases and the attorney general is likely to decide before the end of the year whether to indict him on charges of bribery, fraud and breach of trust.