Tensions rise in Jerusalem ahead of US embassy relocation 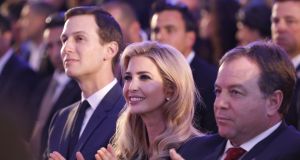 Ivanka Trump and her husband Jared Kushner (left) attend a reception for the US delegation ahead of the move of the US embassy to Jerusalem. Photograph: Abir Sultan/EPA

Even by Middle East standards this promises to be an extremely tense week.

On Monday, the inauguration ceremony takes place marking the controversial relocation of the United States embassy from Tel Aviv to Jerusalem.

On Tuesday, Palestinians mark Nakba (catastrophe) Day, marking the 70th anniversary of the establishment of the state of Israel and the birth of the Palestinian refugee problem. This week also ushers in the start of Muslim holy month of Ramadan.

More than 40 Gaza Strip residents have been killed and thousands wounded in six weeks of demonstrations on the border with Israel. The March of Return protests will peak with two “days of rage” declared by the Palestinians on Monday and Tuesday when they plan to breach the border.

“We are in the midst of the most difficult month and the most sensitive week we’ve seen in years,” a senior Israeli police officer said.

Both sides have been preparing for weeks ahead of the expected showdown.

Businesses and schools will be closed in Gaza on Monday and Tuesday. Hamas leader Ismail Haniyeh said the entire Palestinian people will be out on the streets.

Israeli forces have deployed in unprecedented numbers along the entire length of Gaza Strip, tripling the number of troops and cancelling training exercises this week to free up more soldiers. Israel has made it clear that it will not permit any infiltration attempts. Israel’s worst-case scenario is a situation in which an Israeli border community is overrun or a soldier is kidnapped.

Israel dropped pamphlets over Gaza on Sunday warning residents to keep away from the border and stating that Hamas infrastructure targets will be hit if there is damage to the border fence.

Israel regards Jerusalem as its “eternal and undivided” capital while the Palestinians claim East Jerusalem – captured by Israel in the 1967 Six-Day War – as the capital of a future state.

Mr Trump’s decision in December to recognise Jerusalem as Israel’s capital reversed seven decades of US policy and was seen as a major diplomatic achievement for Israeli prime minister Binyamin Netanyahu.

Hosting the large American delegation – which includes Ivanka Trump and her husband Jared Kushner, who is leading US Middle East peace efforts – Mr Netanyahu on Sunday praised Mr Trump for “making history,” urging other countries to “move your embassies to Jerusalem because it’s the right thing to do” and “because it advances peace.”

Addressing the gathering, US deputy secretary of state John Sullivan called the decision to move the embassy “a long overdue recognition of reality”.

Guatemala will also transfer its embassy to Jerusalem this week, followed by Paraguay at the end of the month and Israel says other countries will follow suit.

Even though the European Union opposes moving embassies to Jerusalem, the ambassadors of four EU countries – Austria, Hungary the Czech Republic and Romania – attended Sunday’s reception at the foreign ministry in Jerusalem to honour the inauguration of the US embassy.

Although US ambassador David Friedman will now work out of the new embassy – based in what was the US consulate at the edge of the capital’s southern Arnona neighbourhood – only a few dozen staff at this juncture are actually relocating from the Tel Aviv embassy.

But the move is still replete with historical significance and has prompted anger throughout the Arab world, prompting the Palestinians to break off peace contacts with the Trump administration.