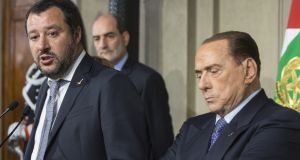 Matteo Salvini, leader of Eurosceptic party League and Silvio Berlusconi, leader of the Forza Italia party: “We will evaluate the government that is created, supporting any measures that are useful for Italians,” tweeted Mr Berlusconi. Photograph: Giulio Napolitano/Bloomberg

The anti-establishment Five Star Movement and the far-right League have moved closer to forming a Eurosceptic government in Italy after Silvio Berlusconi, the former prime minister, gave his blessing to a deal that would secure power for two avowedly populist forces in the euro zone’s third-largest economy.

Luigi Di Maio, the Five Star leader, and Matteo Salvini, the League leader, said they would work until Sunday to try to thrash out details of a potential agreement, including who would secure the job of prime minister. Key cabinet positions, including the finance ministry and foreign ministry, were also being discussed.

In a joint statement after meeting on Thursday, Mr Di Maio and Mr Salvini described a “positive climate to define the government’s agenda and priorities” and said “technical” meetings among staff would begin in the afternoon.

“In terms of the composition of the executive, and the premier, significant steps forward were taken amid constructive collaboration on all sides, with the aim of quickly giving an answer and a political government to the country,” they said.

Mr Di Maio and Mr Salvini have held on/off talks about forming a governing alliance for weeks, following Italy’s indecisive general election in March. The talks were agreed by Sergio Mattarella, Italy’s president, after the two leaders asked for more time to reach a deal and avert a caretaker administration and a fresh election.

An alliance between Five Star and the League has long been considered the most destabilising outcome of the election because both parties have attacked EU fiscal rules, banking regulations, trade deals and sanctions against Russia. The parties were the winners of the March poll but their gains were not decisive enough to allow either to govern single-handedly.

On Thursday, the yield on Italy’s 10-year bond – an important measure of investor confidence in the country – rose to 1.9 per cent, a six-week high, reflecting rising investor jitters about the possible government.

As recently as Monday, Five Star and the League had agreed the only viable option after fruitless post-election talks – including potential alliances with other parties – was a new election this year, which would have been unprecedented in Italy’s postwar history.

Mr Berlusconi, the 81-year-old media mogul and former prime minister, had previously ruled out offering his support to a Five Star-League government unless his party was fully represented in the executive. Five Star had vowed not to govern with Mr Berlusconi’s Forza Italia party, seeing it as part of the traditional political class it has been trying to unseat.

But on Wednesday night Mr Berlusconi gave an effective green light to a deal, saying that while Forza Italia would vote against a Five Star-League government in parliament, this would not jeopardise his alliance with Mr Salvini on a local and regional level, where they rely on each other in many municipal and regional councils.

“If a centre-right political force takes on the responsibility of creating a government with Five Star we note that with respect,” Mr Berlusconi said in a tweet. “We will evaluate the government that is created, supporting any measures that are useful for Italians.”

Should the talks between Five Star and the League fail, Mr Mattarella is still expected to proceed to nominating a caretaker administration, replacing the incumbent centre-left government led by Paolo Gentiloni.

In a speech at the European University Institute in Florence on Thursday, Mr Mattarella issued a thinly veiled warning to Five Star and the League not to tear up Rome’s longstanding and deep ties with the EU, which have frayed amid discontent with Brussels over economic policies and migration in recent years.

“To believe one can go it alone is pure illusion, or even worse, a wilful hoax against public opinion,” Mr Mattarella said. “Everyone knows that none of the great challenges facing our continent can be tackled by any single member state, on its own.” – Copyright The Financial Times Limited 2018