Syrian refugees struggling to find their feet in Jordan

Finding work and education is a problem, but most would not choose to return to Syria 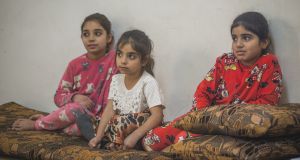 Three of Mo’een Al Ali’s daughters watch on as their parents explain the barriers preventing them from going to school. Photograph: Peter Biro/European Union 2018

Three years have passed since the last time Mo’een Al Ali’s children stepped inside a school classroom. The local schools are full and the family cannot afford the bus fare to send their younger children to the neighbouring district. Under Jordan’s education policy the two eldest, aged 16 and 14, cannot return to formal schooling after missing out on more than three grades in the system.

“It makes me feel so bad. If I had the money I’d send them to a private school,” says Al Ali. “It gives me a pain in my gut. I feel guilty that it’s my responsibility and I’m not able to do anything about it.”

We’re sitting in Al Ali’s cramped, two-room home on the outskirts of Irbid, a city in northern Jordan about 25km south of the Syrian border where more than 74,000 Syrian refugees live.

The family struggle to pay the monthly €160 for rent and utilities. Al Ali sometimes does some construction work and his wife Fatima Khaled El-Hallaq cleans neighbours’ homes, but the cost of raising a family with eight children is high. They used to receive financial assistance from NGOs but, after five years in the country, they are no longer eligible for support.

Asked if they would consider returning home to Syria, Al Ali shakes his head. “None of our relatives are thinking about it either. I’ve heard there are no safe places in Syria. We know people who went back and we’ve heard they take the men away. Those people have a lot of regret about returning.”

The couple, who were married 17 years ago in the region of Quneitra in southwestern Syria, are waiting for their new Jordanian marriage certificate to arrive. Three of their children have been issued with Ministry of Interior (MOI) identification cards and they’re trying to register the remaining five.

“In Syria you didn’t need this documentation, especially in the small towns, but in Jordan you have to register the birth straight away. It’s not so formal in Syria.”

In March, Jordan’s MOI launched the “Amnesty” campaign to regularise the status of the hundreds of thousands of Syrian refugees living outside refugee camps. The programme was recently extended until March 2019 in an attempt to encompass all Syrian refugees without papers.

“Missing just one document can be paralysing,” says Kari Dienar of Mercy Corps, an NGO that runs a documentation centre for Syrian refugees in the town of Mafraq, close to Jordan’s border with Syria. “Many Syrians fled without proper paperwork and that makes it hard to get a Jordanian ID card . . . if you do not have the right documents you can be evicted from housing, not be able to access medical care, education – or, most often, just be afraid to leave your home.”

The majority of Syrians who arrive over the Jordanian border come from Daraa, a predominantly rural and agricultural part of the country. In these areas marriage certificates are often covered by Sharia law and may not be recorded on paper.

The Mafraq centre has launched a website called Khabrona.info where refugees can find information on civil documentation, and it also uses Facebook to disseminate information. “A lot of people don’t know how to obtain their documents and most don’t have laptops or computers, but they do have mobile phones,” says Wissam Khader from Mercy Corps. “Facebook opens the gate for people to ask questions and then our officers can refer them on to the relevant organisations.”

Ahmed, who is attending the centre for advice, was sent back to a refugee camp after he was caught working illegally without a permit. “If you don’t work you can’t survive. I had an MOI card but not a work permit. We had lived in the camp for three months before but we had to leave. Everything is provided for you there but people cannot live for too long in that setting.”

Like every Syrian I speak with in Jordan, Ahmed is not considering returning to Syria. Ismail, who is in his 60s, feels similarly about any possibility of return to his homeland. “It’s impossible if the same person is in power,” he says in reference to Syrian president Bashar al-Assad. “He has a grip of steel on the country. Some people are going back but it’s a very small number. I will never go back.”

The UN refugee agency, the UNHCR, said earlier this month that 250,000 Syrians could return home next year, and that 37,000 Syrian refugees have returned from Lebanon, Jordan, Turkey, Iraq and Egypt in 2018.

Matteo Paoltroni of the Jordanian EU office for humanitarian aid says there has been no push from the Jordanian government for Syrians to return. “The first respondent to the needs of a Syrian refugee is the Jordanian, their neighbour,” he says. “They are brothers, they come from the same area. We draw the borders, not the people.”

Carlo Gherardi of the Norwegian Refugee Council says the numbers returning are “minuscule”. “We must take into account that a huge number will never want to go back,” he says. “Refugees feel opening the border is not enough to guarantee safety to go back home. The political path is happening but not the feeling of safety to go home.”

Just 8 per cent of Syrians in Jordan are keen to return home in the next 12 months, according to a recent survey by the UNHCR, he says. “It should be a dignified return with services in place – school for children, hospitals, public infrastructure. But this is still a country at war.”

There are some 1.26 million Syrian refugees living in Jordan, according to the country’s 2016 census. More than 671,000 of these have registered with the authorities, but significant numbers of Syrians remain undocumented. More than 80 per cent of Syrian refugees live in urban areas while the remainder mainly live in two refugee camps – 78,000 in Zaatari in the north of the country and 30,000 in the Azraq camp, which lies east of Amman.

Isra (13), Waam (14) and Ala’a (14) have all lived in Zaatari for six years and barely remember what life was like in Syria. They attend one of the 20 schools in the camp and also take part in programmes at the education centre run by the Norwegian Refugee Council. Based on the small amount she can remember from Syria, Isra believes life in the camp is better. “I have more freedom here. In Syria people wouldn’t let the girls play with boys but here we can all play together.”

Waam also prefers the camp but says the dusty air often aggravates her asthma. She loves the classes at the centre, particularly in the library where they’re currently reading the Arabian Nights folk tales. All three girls dream of leaving the camp when they’re older, with aspirations of becoming teachers or astronomers.

Majd Hariri, a refugee living in Zaatari and a former teacher, helps out at the centre. “We work with many kids who are traumatised. So many children clearly remember the violence and the random arrests made in their homes. A lot suffer from sleep disorders and can act out violently.”

I would like her to continue her studies. She shouldn’t get married before 20

Back in Irbid the Al Ali family are hoping to find a more affordable home as soon as possible. However, the main goal is to get the younger children back into school. And what’s in store for the two eldest children? Moufid (16) mumbles quietly that he’d like to work as a waiter in a restaurant. He has no intention of returning to Syria, even if the war ends. His sister Dalia (14) remains silent.

“I would like her to continue her studies,” interjects her mother, adding that she does not want her daughter to marry too young. “She shouldn’t get married before 20. I believe the Jordanian marriage system is better than the Syrian one. It doesn’t matter to us if she marries a Jordanian or a Syrian. There’s no difference between us, we’re neighbours. The most important thing is she does not repeat the same mistakes we made.”