Risk of death, or capture by Libyan coast guard worth taking for Ibrahim (17)

Rescue ships have alleviated a catastrophic death toll, claim charities and the UN 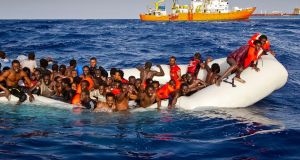 Migrants in difficulty are approached by the Aquarius. Photograph: Patrick Barr/AP

In Tripoli, the capital city of Libya, Ibrahim is saving up money so he can try the sea again. He’s 17, a gay Somali who fled his home in Mogadishu when he realised he would never be accepted by his community.

To him, Europe meant freedom and acceptance. Now he’s stranded in a dangerous city, divided between militias: many of which are directly involved in the people smuggling trade. They see foreigners like Ibrahim as easy prey – a black African who can be sold into forced labour or held for ransom – putting him at constant risk of being pulled back into a network of trafficking, abuse and exploitation he might not survive.

Ibrahim, whose name has been changed for his safety, has already tried twice to get across the Mediterranean to Italy, but he was stopped by the EU-funded Libyan coast guard.

For months, he has been asking for evacuation by the United Nations Refugee Agency (UNHCR) office in Tripoli, but says it won’t return his calls. He says he has seen one friend shot, and heard another was killed in the past few weeks, after Libyans tried to abduct them for ransom. Sometimes he sweeps the streets for money, but usually stays inside all day.

To go to sea now costs up to $2,500 (€2,200), depending on which country you’re from: Eritreans usually pay the most, because they have a large diaspora in the West and are perceived as having more money, while impoverished Darfuris pay the least. Ibrahim thinks he would need $2,000, which he’ll try to convince his family in Somalia to raise for him. He says the risk of death, or capture by the Libyan coast guard, is worth taking for that slight shot at a new beginning.

His chances of success have just got lower. In early December, the NGO Médecins Sans Frontières (MSF) and partner SOS Méditerranée announced they were ending their search-and-rescue work in the central Mediterranean, which was already the deadliest sea route for refugees and migrants in the world.

The agencies’ rescue ship, the Aquarius, was often the only private rescue ship operating between Libya, Italy, and Malta, and had rescued or taken 30,000 refugees and migrants to safety since 2016.

Other charities that had already suspended rescue operations include Save the Children. “For too long we have been the substitution for the inexistent and inadequate European policies for search-and-rescue and for hosting migrants,” said Save the Children’s director general Valerio Neri last year.

MSF said it was forced to terminate its work as a result of “a sustained smear campaign, spearheaded by the Italian government and backed by other European countries to delegitimise, slander and obstruct aid organisations trying to save the lives of vulnerable people”.

Panama revoked the Aquarius’s registration in September, citing pressure from Italy. In November, Italian authorities accused the NGOs operating the Aquarius of dumping “toxic waste” in its southern ports.

Charities and the UN say rescue ships have alleviated a catastrophic death toll: more than 2,210 people have died or gone missing in the Mediterranean this year, with departures from Libya making up the majority.

However, European politicians and EU border agency Frontex have accused the operators of rescue ships of acting as a “pull factor” for migrants and refugees. Italy’s interior minister, Matteo Salvini, said charities were providing a “taxi service” bringing migrants to Italy from Libya.

Responding to the withdrawal from service of the Aquarius, he tweeted: “Fewer sailings, fewer landings, fewer deaths. That’s good.”

Since February 2017, under a deal struck by Italy in an attempt to stop new arrivals, the EU has been funding the Libyan coast guard to intercept boats. Those caught are returned to indefinite detention, in a network of centres operated by the UN-backed Libyan government’s Department for Combatting Illegal Migration (DCIM).

Human rights groups say the coast guard has repeatedly demonstrated little regard for human rights and is returning people to a war zone.

The EU has warned rescue boats not to get in the way of the Libyan coast guard’s work, and the role European vessels play in the Mediterranean has also changed.

Speaking in the Dáil in November, Minister of State for Defence Paul Kehoe was asked why the LE James Joyce recently spent 100 days at sea without saving a single life. In 2015, the Irish Navy rescued more than 8,500 people in the Mediterranean.

Kehoe said Ireland was now participating in a “military mission”, rather than a humanitarian one.

The Naval Service had previously been carrying out search-and-rescue missions through Operation Pontus, a bilateral agreement with Italy that began in 2015. Last year, Ireland joined the UN-mandated mission, Operation Sophia, with other European member states.

“The sole focus of [Operation Pontus] was the rescue of migrants in the Mediterranean,” said Kehoe. “Now we’ve joined Operation Sophia, it specifically seeks to counter traffic and smuggling . . . by taking action against criminal networks.”

While European politicians, including Kehoe, say the new hardline strategy is essential to destroy smuggling operations, refugees in Libya say they are already trapped in brutal cycles of abuse and exploitation, and need an escape. They say the hundreds of millions the EU is now spending in Libya, with the aim of stopping migration to Europe, is fuelling an industry that sees refugees and migrants as disposable and tradable.

While some migrants and refugees currently stranded – including Nigerians, Gambians and Sierra Leoneans – have told The Irish Times they want to go home again. Others – including Eritreans, Somalis and Sudanese – say this is not an option for them, and they need to be given asylum in a safe country.

The UNHCR told The Irish Times it aims, in 2019, to resettle 2,500 migrants and refugees now in Libya, meaning 95 per cent of the 60,000 people eligible to be considered will remain in that country, unless they find another way out. The agency is still calling for more countries to offer spaces, but progress is slow.

One refugee who spoke to The Irish Times claimed to have tried to cross the sea six times, but had been turned back every time. He said the risk of dying in Libyan detention centres was significant anyway, because of the ill treatment and high levels of disease. Multiple other detainees related an incident where fellow detainees were sold to traffickers by the managers of a a DCIM-run centre and electrocuted when they couldn’t pay a $20,000 ransom.

“The waiting time is too long and it is obviously dangerous to wait,” said an Eritrean.

There has also been reports of more than a dozen deaths this year in “official” migrant detention centres, including a young boy who died from appendicitis, because he wasn’t given medical care. This death was confirmed by the UN children’s agency, Unicef.

“People used to plan two things: either to die or to reach [Europe] aid; there was no way to be certain someone had died at sea. “The only way you can know is once you don’t hear from [them in] detention or Europe,” said Ibrahim. “Then you will forget him. We remove [them from] our mind because if we try to remember we will be sad.”

An Irish nurse tells her story

Aoife Ní Mhurchú, an Irish nurse working for MSF, says she spent nine months on the Aquarius and witnessed at first hand how the boat made the difference between life and death for nearly 30,000 people.

“It’s difficult and sad to be here now and watch it slowly come to an end. The stories and the faces of the people we rescued are still with me,” she says.

“Over and over, they told us heart-wrenching stories of the violence and abuse they endured on the dangerous journeys that took them from their countries of origin, through Libya, and on to the Mediterranean Sea.

“Once rescued by the Aquarius, these vulnerable people were given medical attention. But they were also treated with respect and dignity, just as any human being should be shown.”

Ní Mhurchú says she fears that with the end of the search-and-rescue service provided by the Aquarius, refugees and migrants still trying to make the journey across the Mediterranean will be left to drown at sea or returned against their will to Libya.

“Europe and the rest of the world would do well to show them some compassion, instead of denying them their right to seek safety.”