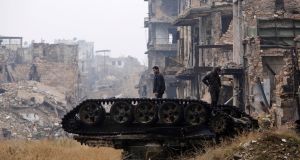 The advancing Syrian army used loudspeakers to broadcast warnings to insurgents that it was poised to enter their rapidly diminishing area. Photograph: Reuters

As President Bashar al-Assad’s army closed in on the last rebel enclave in Aleppo on Tuesday, Russia, Iran and Turkey said they were ready to help broker a Syrian peace deal.

The Syrian army used loudspeakers to broadcast warnings to insurgents that it was poised to enter their rapidly diminishing area during the day and told them to speed up their evacuation of the city.

Complete control of Aleppo would be a significant victory for Mr Assad against rebels who have defied him in Syria‘s most populous city for four years.

Ministers from Russia, Iran and Turkey adopted a document they called the “Moscow Declaration”, which set out the principles that any peace agreement should follow. At talks in the Russian capital, they also backed an expanded ceasefire in Syria.

“Iran, Russia and Turkey are ready to facilitate the drafting of an agreement, which is already being negotiated, between the Syrian government and the opposition, and to become its guarantors,” the declaration said.

The move underlines the growing strength of Moscow’s links with Tehran and Ankara, despite the murder on Monday of Russia’s ambassador to Turkey, and reflects Russian president Vladimir Putin’s desire to cement his influence in the Middle East and beyond.

Russia and Iran back Mr Assad while Turkey has backed some rebel groups.

Mr Putin said last week that he and his Turkish counterpart Recep Tayyip Erdogan were working to organise fresh peace negotiations on Syria without the involvement of the United States or the United Nations.

Russian foreign minister Sergei Lavrov said the UN-brokered negotiations in Geneva had run into a dead end due to ultimatums from the Syrian opposition in exile. But Mr Lavrov and US secretary of state John Kerry discussed restarting negotations between the warring sides, said the Russian foreign ministry.

An operation to evacuate civilians and fighters from rebel-held eastern Aleppo has now brought out 37,500 people since late last week, said Turkey. As more buses left the city on Tuesday, Turkish and Russian ministers estimated the evacuation would be complete within two days.

But it is hard to know if that goal is realistic, given the problems that have beset the evacuation so far and the wide variation in estimates of how many have left and how many remain. The International Committee of the Red Cross put the number evacuated since the operation began on Thursday at only 25,000.

A rebel official in Turkey said that even after thousands left on Monday, only about half of the civilians who wanted to leave had done so.

Insurgent fighters would only leave once all the civilians who wanted to go had departed, said the rebel. The ceasefire and evacuation agreement allows rebels to carry personal weapons but not heavier arms.

Estimates of the number of people waiting for evacuation range from a few thousand to tens of thousands.

The UN said Syria had authorised the world body to send 20 more staff to east Aleppo who would monitor the evacuation.

A UN official said 750 people had been evacuated from the two besieged Shia villages of Foua and Kefraya, which government forces had insisted must be included in the deal to bring people out of Aleppo.

The evacuations are part of a ceasefire arrangement that ends fighting in Aleppo, once Syria’s most populous city.

Conditions for those being evacuated are grim, with evacuees waiting for convoys of buses in freezing winter temperatures. An aid worker said that some evacuees had reported that children had died during the long, cold wait.

In government-held parts of Aleppo, the mood was very different.

A large crowd thronged to a sports hall in the city, waving Syrian flags and dancing to patriotic music, a large portrait of Dr Assad hanging on one wall, in a celebration of the insurgent defeat in the city that was broadcast live on state television.

The rebel withdrawal from Aleppo after a series of rapid advances by the army and allied Shia militias including Hizbullah since late November has brought Mr Assad his biggest victory of the nearly six-year-old war.

However, despite the capture of the ruined city and progress against insurgents near Damascus, the fighting is far from over, with large areas remaining in rebel control in the northwestern countryside and in the far south.

For four years, the city was split between a rebel-held eastern sector and the government-held western districts. During the summer, the army and its allies besieged the rebel area before using intense bombardment and ground assaults to retake it in recent months.

Meanwhile, Israeli prime minister Binyamin Netanyahu said on Tuesday that Israel was looking into the possibility of bringing wounded refugees from the Syrian city of Aleppo to Israeli hospitals for treatment.

Many wounded in Syria‘s civil war have been brought discreetly across the Israeli-occupied Golan frontline to Israeli hospitals for the past three years, although Israel and its northern neighbour are formally in a state of war.

“We’re prepared to take in wounded women and children, and also men if they are not combatants . . . bring them to Israel, take care of them in our hospitals, as we’ve done with thousands of Syrian civilians,” said Mr Netanyahu said at a meeting with foreign reporters in Jerusalem.

“I’ve asked the foreign ministry to seek ways to expand our medical assistance to the civilian casualties of the Syrian tragedy, specifically in Aleppo,” he said.