Truck attack: ‘People will be back - there’s a great Berliner sense of defiance’

‘I saw the injured and those beyond help. It’s the first time I’ve experienced something like this’ 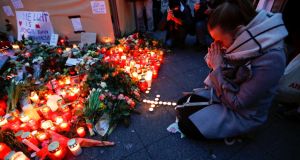 A woman prays next to a group of lighted candles at the Christmas market in Berlin where a truck ploughed into shoppers on Monday, killing 12. Photograph: Fabrizio Bensch/Reuters 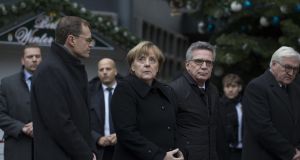 In the freezing mist of a bleak Berlin morning, the sour whiff of raclette cheese hangs over the empty Christmas market.

On either side, broad boulevards normally bustling with traffic are empty. Standing in the centre of one of them, the Budapesterstrasse, Colm Lyons shakes his grey, curly mane in disbelief.

The financial lawyer and Monkstown native lives down the street from the Breitscheidplatz market, and passed by here shortly before the Monday evening truck attack.

Moments afterwards he was out on the street again, watching the aftermath of the vehicle’s deadly rampage.

On Tuesday morning he returned again to stare at the shattered windscreen of the empty Scania truck that had claimed 12 lives some 12 hours before.

This is not Lyons’s first such experience: he was visiting Paris and was near the offices of Charlie Hebdo during the January 2015 gun attack, then found himself a few hundred metres from the subsequent supermarket siege.

He had been in London near the site of a 1993 IRA bombing, he says, and narrowly survived another bomb attack closer to home. And now an attack close to his adopted home in Berlin.

“This market is basically an open-air pub during advent, very busy at weekends and less so on a Monday - but still a lot of people,” he says. “When I passed, it did occur to me that it was quite vulnerable, close to the road.”

Minutes after the attack he saw people streaming away quickly towards him, but not running. Within half an hour, he says, a cold calm had settled as investigators and security staff moved in to seal off the site.

By that stage, Maria Rönsberg from Augsburg in Bavaria had long since fled the market with her husband and daughter.

The 67-year-old pulls out her smartphone to show selfies they took at one of the mulled wine stands, minutes before it was demolished by the lorry. “We were around the corner, heard the bang and thought it was a gunshot,” she said, fighting back tears. “My first thought was ‘out, out, out!’ We ran back to our hotel and only came out now.”

When Berliner Marko Standke noticed people running from the market, he ran in the opposition direction, towards the carnage, and tried to help.

“We did what we could until the first aid people arrived,” he said . “It’s such a shock - I saw the injured and those who were beyond help. It’s the first time I’ve experienced something like this in my life.”

Klaus, a 62-year-old local man, recalls seeing four people under the truck. “They were stuck and couldn’t be helped,” he says.

As the grey morning wears on, the broad and empty Budapesterstrasse used by the truck fills with people who watch it and and trailer being transported away separately.

Sticking out of the truck cabin’s shattered windscreen, a piece of picket fence and a strip of fake greenery. The trailer’s ripped grey tarpaulin flaps gently and, when it is moved, reveals an overturned artificial Christmas tree, baubles still attached, star missing. On the curb stands a lonely, half-drunk, long-cold beaker of mulled wine.

Behind the police barriers, journalists from Sweden to China jostle for camera angles while locals swap stories and pictures.

Among them are many people who work in the shopping centre opposite, a cafe owner who saw body parts covered in a sheet.

Overnight, one of Berlin’s most busy intersections was brought to a standstill as investigators in white plastic overalls went about their work, erecting white barriers to block inquisitive gazes.

As they worked, one man was apprehended two kilometres from the scene.

Another man’s body was removed from the truck; he had been shot dead and left in the passenger seat.

“I can’t imagine anyone wanting to come back here again,” says one onlooker, eyeing the wooden cabins that remained closed – here and at Christmas markets across the capital.

When chancellor Angela Merkel arrived at the scene at 3pm, the watery light is already fading again, with no market lights today to give things a lift.

After laying flowers with mayor Michael Müller, the two enter the blue, glass-tiled octagon of the post-war Kaiser Wilhelm memorial church. Standing in front of the condolence book, the chancellor’s pen hovers for 10 seconds. What to say? What to write?

Beside the church, someone has pasted up a hand-drawn poster, saying in French: “Never Afraid.”

Watching the comings and goings, Lyons, the Monkstown native, says he is confident his German friends and neighbours, though shaken, will remain calm, stand by Merkel and resist the populist, anti-asylum seeker siren song on offer from Alternative für Deutschland (AfD).

“People like the AfD only ever have one solution and it ends in that,” he says, pointing to old Kaiser Wilhelm church tower, bombed in 1943 when Hitler’s war blew back on Berlin.

“I think people will be back here soon at the market, there’s a great Berliner sense of defiance,” he adds.

“But I know from experience that people who saw the attack up close will never forget it.”