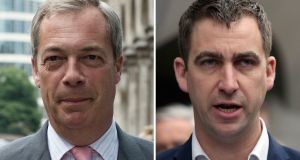 Nigel Farage and Brendan Cox as the widower of murdered MP Jo Cox hit out on Twitter at the former Ukip leader’s response to the suspected terrorist attack in Berlin. Photograph: PA Wire

Nigel Farage has been threatened with legal action over an extremism row with the widower of murdered MP Jo Cox following the Berlin terrorist attack.

Campaign group Hope Not Hate said it had asked the former Ukip leader to apologise for suggesting its supporters “masquerade as being lovely and peaceful but actually pursue violent and very undemocratic means” or face legal action.

Mr Farage’s comments on radio station LBC came after Brendan Cox had criticised a tweet sent by the right-wing politician which linked the Berlin atrocity with Chancellor Angela Merkel’s policy on refugees.

In an appeal for funds on its website entitled “Help us take Nigel Farage to court”, Hope Not Hate said: “This morning, on LBC radio, former Ukip leader Nigel Farage launched an outrageous attack on us, on Brendan Cox, husband of murdered MP Jo Cox, and by association on everyone who believes in Hope not Hate.

“Our lawyer has just sent Farage a letter demanding he retracts and publicly apologises or we will begin legal proceedings against him.”

Early on Tuesday Mr Farage, who stood down as Ukip leader in November, had tweeted: “Terrible news from Berlin but no surprise. Events like these will be the Merkel legacy.”

The comment prompted hundreds of retweets and replies, including from Mr Cox, whose Labour MP wife was shot and stabbed to death by neo-Nazi Thomas Mair in her Batley and Spen constituency days before June’s EU referendum .

Mr Cox replied to the tweet by telling the politician that “blaming politicians for the actions of extremists” was a “slippery slope”.

Later, in an radio interview, Mr Farage responded by saying: “Well, of course, he would know more about extremists than me, Mr Cox, he backs organisations like Hope Not Hate, who masquerade as being lovely and peaceful but actually pursue violent and very undemocratic means.

“I’m sorry Mr Cox, it is time people started to take responsibility for what’s happened. Mrs Merkel had directly caused a whole number of social and terrorist problems in Germany, it’s about time we confronted that truth.”

Chesterfield MP Toby Perkins added: “When your entire career has been built on hate, not hope, it perhaps shouldn’t shock me, but Farage still sinks lower than I’d have believed.”

Tracy Brabin, who won the byelection to succeed Ms Cox in her Batley and Spen constituency, said: “Beggars belief . . . A new low for Farage.”