Russia seeks to avoid rupture with Turkey over ambassador murder

Commentators comparing incident to killing of archduke Franz Ferdinand in 1914 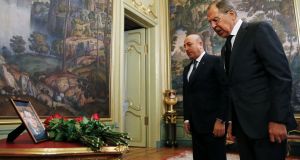 As Russia reeled from the shock of the assassination of Moscow’s ambassador to Turkey, Andrei Karlov, the Kremlin appeared keen to prevent the murder from rupturing ties between the two countries already strained by the war in Syria.

Russia’s president Vladimir Putin despatched a team of security experts to Ankara to investigate the killing, which he said would only bolster the Kremlin’s resolve to battle international terrorism.

Commentators on the internet have been comparing the dramatic incident to the killing of archduke Franz Ferdinand, the heir to the Austro-Hungarian empire, by a Serbian terrorist in June 1914 that sparked the outbreak of the first World War.

Regional rivals since imperial times, Russia and Turkey have taken opposite sides in the Syrian conflict. Russia has stood by its long-time ally Bashar al-Assad while Turkey has called for the removal of the Syrian leader as a prerequisite to peace in the region. Turkey also resents Russian support for Kurdish rebels that have captured territory close to its border with Syria.

Moscow has only recently moved to mend relations with Ankara that broke down after Turkey shot down a Russian military jet it said had strayed into its territory in November 2015. Mr Putin reacted on that occasion with fury, slapping an embargo on Turkish food imports and banning Russian package holidays to Turkey. The Kremlin began easing the restrictions only after Turkey’s president, Recep Tayyip Erdogan, apologised for for the incident last June.

Russia’s reaction to the murder of Mr Karlov in the Turkish capital has been more moderate, suggesting the Kremlin wants to avoid another cold war with Turkey.

Speaking to reporters on Tuesday, Dmitry Peskov, Mr Putin’s spokesman, described the murder as a “provocation” designed to disrupt Russian-Turkish ties and derail international efforts to settle the Syrian conflict.

“The only thing these two countries can do in the wake of such a provocation is to become closer and more effective in co-operating against those behind this provocation,” he said.

In a further signal that the Kremlin was determined to contain diplomatic fallout, Sergei Shoigu, Russia’s defence minister, went ahead on Tuesday with plans to hold talks with his Turkish and Iranian counterparts about the Syrian peace process that had been scheduled before the incident.

Thanking Fikri Izmit, the Turkish defence minister, for coming to Moscow, Mr Shoigu said Russia and Turkey would continue to co-operate in the battle against international terrorism. “I am sure that our joint efforts will show results,” he said.

Russia’s foreign ministry, however, sounded the alarm about deteriorating security in Turkey, advising Russian travellers on Tuesday to think twice about visiting the country.

“The world has begun to change. If an act of terrorism was once considered a tragedy that was discussed for months, now several such attacks can happen in one day – they have become commonplace. That’s the most frightening thing” about this, said Oleg Syromolotov, Russia’s deputy foreign minister.

Foreign observers noted that Mr Putin, while letting Mr Erdogan off the hook in public, would likely milk the murder of Mr Karlov to gain additional leverage over Turkey.

“No doubt in public Russia will second whatever explanation the Turks produce to account for the attack,” wrote Dimitar Bechev, the director of the Sofia-based European Policy Institute. “In private, however, there will be a price tag. Turkey will have to go the extra mile in accommodating Russia – most likely in Syria but potentially on other issues as well.”