Analysis: Pressure from UN will not stop fighting 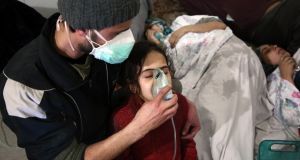 Syrians receive treatment for breathing difficulties at a clinic in Syria’s Eastern Ghouta on March 7th after regime air strikes which medics said were consistent with a toxic attack. Photograph: Getty Images

Syria and Russia are determined to capture the jihadi-held enclave of eastern Ghouta despite pressure from the UN Security Council and western powers to abide by a countrywide ceasefire.

The towns, villages and farmland east of Damascus are the most important military objective of the government and its allies since they captured eastern Aleppo in December 2016.

The Syrian government is no longer prepared to tolerate jihadis on the doorstep of Damascus as fighters have, since 2012, deployed snipers and suicide bombers and continue to lob mortars into the capital, which is adjacent to eastern Ghouta.

Until this week, the Syrian army – notably the elite Republican Guards and “Tiger” forces – had provided the ground units involved in the offensive in eastern Ghouta. Hizbullah, pro-Iranian Shia militiamen and Palestine Liberation Army fighters have now been brought in as reinforcements.

A source in Damascus told The Irish Times that the insurgents are estimated to number 20-25,000 and are local men. “The absence of foreign fighters makes it easier” to negotiate deals to end the fighting, he said. Talks have been taking place between the army and the four jihadi groups involved since the army offensive began on February 18th.

Contacts have been fruitless so far, perhaps, due to the large number of fighters or because they may have believed the army would not mount an all-out offensive while troops were engaged on other fronts. The situation has no changed: the army has taken most lost territory and is not deterred by external pressure.

Consequently, Russia has conducted contacts via Turkey with holdouts who are concentrated in Douma, the area’s main town. Civilians have also flocked there, putting themselves at risk and exerting pressure on fighters to do a deal. Only 13 civilians have left the enclave along a southern corridor opened by Russia. A second, in the north, was opened on Thursday.

If and when contacts bear fruit, Syria says that its minister for national reconciliation affairs, Ali Haidar, will organise an amnesty for those choosing to disarm and transport to a location of choice for those who do not. Russia has pledged to guarantee the safety of evacuated fighters, who could number in the thousands if fighters’ families leave.

The largest rebel group, Saudi-sponsored Jaish al-Islam, is said to seek evacuation to Deraa in the south, while the second largest, Faylaq al-Rahman, prefers the Turkish-held enclave in the north where they could join Ankara’s surrogate Syrian Free Army units in the “Euphrates Shield” operation mounted against US-backed Syrian Kurds.

Al-Qaeda’s Tahrir al-Sham, which has some 400 fighters in Ghouta, and its occasional ally Ahrar al-Sham, could go to Idlib in the northwest, the last entire province to remain outside government control. There a Turkish-formed coalition of non-al-Qaeda factions has battled al-Qaeda for control, while the Syrian army has seized areas on the edge of the province.

Haidar has said 100,000 fighters from all fronts have accepted an amnesty and returned to normal life. Syrians who opt to fight remain a problem for the government and its allies as well as society. Many of these men were youngsters who took up arms when the war began and have no profession other than fighting or holding contested areas.