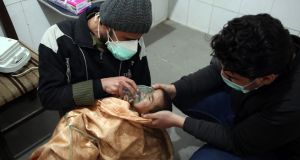 Syria’s army is poised to slice rebel-held eastern Ghouta in two as forces advancing from the east link up with troops at its western edge, a pro-Damascus commander said on Thursday, piling more pressure on the last major rebel enclave near the capital.

The government, backed in the war by Russia and Iran, is seeking to crush the enclave in a ferocious campaign that the Syrian Observatory for Human Rights, a UK-based monitor, says has killed 909 civilians in the last 18 days, including 91 on Wednesday.

“We came because of the intensity of the bombing,” said Abu Mohammed, a 32-year-old famer who left his cows, sheep and farm equipment to flee to Douma, further into the rebel enclave. “It was a miracle that we made it here,” he said, speaking of the heavy air strikes. As for his former home town of Beit Sawa: “It was totally destroyed. Burnt,” he said.

Defeat in eastern Ghouta would mark the worst setback for rebels since the opposition was driven from eastern Aleppo in late 2016 after a similar campaign of siege, bombing and ground assaults.

The pro-Damascus commander, who spoke on condition of anonymity because he was not authorised to talk to the media, confirmed a report by the observatory late on Wednesday that the enclave had effectively been sliced in two.

But Wael Alwan, the Istanbul-based spokesman for Failaq al-Rahman, one of the main rebel groups in eastern Ghouta, denied that the territory had been cut in half. “No” he said in a text message when asked if the report was correct.

An aid convoy that intended to go to Ghouta on Thursday was postponed, the International Committee of the Red Cross (ICRC) and the United Nations said.

The United Nations says 400,000 people are trapped in the towns and villages of eastern Ghouta. They have been under government siege for years and were already running out of food and medicine before the assault. Many civilians have fled from the frontlines into Douma, a town in the enclave.

Russia, Syrian president Bashar al-Assad’s most powerful ally, has offered rebels safe passage out with their families and personal weapons. The proposal echoes previous agreements under which insurgents, in the face of military defeat, were permitted to withdraw to opposition-held areas along the Turkish border.

Russia’s defence ministry said on Wednesday some rebels wanted to accept the proposal to evacuate. So far rebels have dismissed it in public and vowed to fight on.

“Although we have committed to a daily humanitarian truce, the terrorists continue to indiscriminately shell Damascus,” he said, speaking in response to remarks by UN human rights boss Zeid Ra’ad al-Hussein on Wednesday.

Rescue workers and opposition activists in eastern Ghouta meanwhile have accused the government of using chlorine gas during the campaign.

The government firmly denies this. Damascus and Moscow have accused rebels of planning to orchestrate poison gas attacks in order to accuse Damascus of using banned weapons.

The Union of Medical Care and Relief Organisations (UOSSM), a Syria-focused medical aid group, said reports from doctors in Ghouta indicated a chlorine attack at around 9 pm (7om Irish time) on Wednesday in Saqba and Hammouriyeh.

The White Helmets rescue service said at least 50 civilians had been affected by the gas, while doctors put the number at at least 100, UOSSM said.

Activists on social media shared videos and photos of people with signs of breathing difficulties being given oxygen masks.

Reuters could not independently verify the images or claims. The spokesman for the health authority in the opposition-held area could not be reached for comment.

In recent weeks, the United States has accused Syria of repeatedly using chlorine gas as a weapon. Rebel-held areas of the Ghouta region were hit in a major chemical attack in 2013.

The remaining sliver of territory in eastern Ghouta separating forces advancing from the east and west is in effect a no-go zone because it is all within range of government fire, making it impossible for rebels to cross between the northern and southern parts of the enclave, the commander said.

In military terms, that meant the territory had been bisected, the commander told Reuters.

A rebel fighter with Jaish al-Islam, one of the main factions in eastern Ghouta, said intense fighting was underway.

“Nothing is secure and battles are raging and it’s difficult to predict what will happen,” the fighter, who gave his name as Abu Ahmad al-Doumani, said in a text message to Reuters.

Moscow and Damascus say the Ghouta campaign is necessary to halt deadly rebel shelling of the capital.

The UN Security Council called on Wednesday for the implementation of a February 24th resolution demanding a 30-day ceasefire across Syria and voiced concern about the country’s humanitarian plight.

An aid convoy entered Douma on Monday but it was stripped of some of its medical supplies by the government and unable to completely unload as fighting raged on. The United Nations had hoped to deliver the outstanding aid on Thursday.

“Today’s convoy is postponed,” ICRC spokeswoman Iolanda Jaquemet told Reuters. The United Nations had asked the government to commit to a ceasefire on Thursday to let in more aid.

A Douma resident said civilians were streaming into the town all the time from other areas such as Mesraba.

“The UN continues to receive reports of escalating fighting in East Ghouta and shelling on Damascus,” the UN Office for the Co-ordination of Humanitarian Assistance said in a statement on Thursday about the postponed convoy.

“We continue to call on all parties to immediately allow safe and unimpeded access for further convoys to deliver critical supplies,” it said.

The opposition-run rescue service also said two of its rescuers were killed when their ambulance was hit last night adding its teams were hampered from reaching many victims under rubble with extensive destruction in many areas. – Reuters