London’s weapons deals worth £4.6bn since the war on Yemen launched three years ago 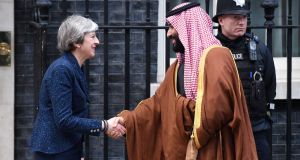 Saudi Arabia’s crown prince Mohammad bin Salman is welcomed by British PM Theresa May on the first of his three-day visit to the UK. Photograph: Victoria Jones/PA

The first overseas tour undertaken by Saudi crown prince Mohammed bin Salman was intended as a “charm offensive” but has sparked controversy in the two capitals he visited and deepened divisions within the Middle East.

In Cairo he met Egyptian president Abdel Fattah al-Sisi, an ally who has jailed opponents, stripped every vestige of democracy from Egypt’s post-Arab Spring politics and is running for re-election in a virtually uncontested poll at the end of this month.

The crown prince was the first Saudi royal to call on Coptic Pope Tawadros II. While the pope welcomed the prince and praised the reforms he has made in Saudi Arabia, the location of the encounter, St Mark’s Cathedral, took place at the site of an Islamic State bombing that killed 25 Coptic Christians in December 2016.

Egypt’s 10 per cent Christian minority is under constant threat and frequent attack from Muslim fundamentalist Salafis and Islamic State affiliates who have embraced anti-Christian tenets of Saudi Arabia’s deeply conservative Wahhabi ideology promulgated by Saudi missionaries across the Muslim world.

While meeting Egyptian newspaper editors, the prince spoke of a regional “triangle of evil” consisting of Iran, Turkey and radical groups such as al-Qaeda, Islamic State, also known as Isis, and the Muslim Brotherhood.

While Sunni Saudis have long regarded Shia Iran a rival in the region and the Muslim world, the inclusion of Sunni Turkey in this “triangle” was meant to restructure regional relations by isolating Iran and Turkey as well as boosting campaigns against radicals.

Although Saudi Arabia has long been at odds with the brotherhood, this move pleased Mr Sisi who has been battling the brotherhood and extremists since 2013. He has also castigated Turkey for hosting exiled members and promoting their cause.

The Saudis see Turkish president Recep Tayyip Erdogan as a rival. His ruling AK Party is modelled on the brotherhood and he aspires to become a regional and Muslim leader, reviving the influence of the Ottoman empire in spite of Arab rejection.

By including radicals in the triangle, the Saudis seek to escape responsibility for the rise of extremism among Muslims. Finally, the prince said Qatar would continue to be ostracised by Saudi Arabia and its Gulf allies, dividing the Gulf Co-operation Council as well as the region.

Prince Mohammed’s visit to London took place despite opposition from those in Britain angered by the kingdom’s crackdown on domestic critics and devastating and deadly war in Yemen. More than 10,000 civilians have been killed in the war which has impoverished 75 per cent of the population.

While a public relations firm lauding his visit was unable to drown out critical voices, he lunched with Queen Elizabeth II, dined with princes Charles and William, and held talks with prime minister Theresa May with the aim of promoting £65 billion in trade and investment in coming years.

Although only 6 per cent of Britons favour arms sales to Saudi Arabia, since the prince launched his war on Yemen three years ago Britain has concluded weapons deals of £4.6 billion (€5.2 billion), an increase of 500 per cent over previous years.

The crown prince’s reforms are hailed as progressive in the ultra-conservative kingdom. But changes he has made have been largely cosmetic: allowing women to drive and attend sports matches, opening cinemas and permitting concerts.

Women are still required to wear concealing clothing while male “guardians” dictate whether they can travel, marry or divorce, receive medical treatment and education, and open bank accounts. Regime opponents are jailed, billions of dollars extracted from leading figures accused of corruption, and criminals convicted of capital offences are decapitated in public on Fridays after communal prayers.