Saudi ceasefire takes effect in Yemen amid doubts over prospects

Coronavirus fears lead to two-week truce, though Houthi rebels yet to officially respond 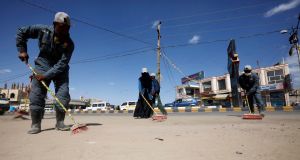 Workers clean a street in Sana’a, Yemen. Fears over the spread of coronavirus has led Saudi Arabia to declare a two-week ceasefire to the conflict in Yemen. Photograph: Yahya Arhab/EPA

A ceasefire proposed by the Saudi-led coalition fighting Iran-backed Houthi rebels in Yemen has come into effect, potentially paving the way for an end to the more than five-year-old conflict.

There was no official word on the ceasefire from the Houthis, raising concerns whether the initiative could translate into concrete changes on the ground. In initial comments, one senior Houthi member said it was a ploy by Saudi Arabia to boost its international standing, while a rebel spokesman accused the coalition of several attacks on Thursday.

Saudi officials said late on Wednesday that the ceasefire would last for two weeks and that it is in response to UN calls to halt hostilities amid the coronavirus pandemic. But the initiative could also be an attempt by the monarchy to pull out of a war that has proved financially and politically costly.

Saudi deputy defence minister Prince Khalid bin Salman said on Thursday that it “will hopefully create a more effective climate to de-escalate tensions” and enable the sides to work towards a political settlement.

He said Saudi Arabia would contribute $500 million (€457 million) to UN relief efforts in Yemen this year, and an additional $25 million to combat the pandemic. “It is up to Houthis to put the health and safety of the Yemeni people above all else,” the prince wrote.

The Saudi-led coalition has been fighting the Houthis since 2015 on behalf of the UN-backed government of Yemeni president Abed Rabo Mansour Hadi. The conflict has killed more than 100,000 people and created the world’s worst humanitarian crisis, leaving millions suffering from food and medical care shortages and pushing the country to the brink of famine.

Shortly after the Saudi announcement, residents in the contested Yemeni province of Marib said a suspected Houthi missile had struck a security building in the city centre. There was no immediate claim of responsibility or reports of casualties.

In 2014, Houthi rebels had overrun most of the country’s north, including the capital Sana’a, forcing Mr Hadi’s government to flee to the country’s south and later to the Saudi capital Riyadh.

“This announcement does not express a genuine intention to achieve peace,” he said. “The Saudis are still employing their air, land and naval forces to tighten the siege on Yemen . . . this is an announcement only to restore [their positions], to close ranks.”

Houthi military spokesman Yehia Sarea said the Saudi forces carried out a series of incursions on Houthi-controlled territory near the border on Thursday – an escalation that was “bound to failure and defeat”.

The Saudi ceasefire declaration came after previous attempts at peace talks and ceasefires failed to hold, but this time the kingdom faces new realities.

With oil prices hovering just above $30 (€27) a barrel, the kingdom has said it will cut government spending as it draws from its hefty foreign reserves to prop up the economy amid a shutdown of businesses across the country due to the pandemic. – AP