Coronavirus: Fatalities in Italy up 610 while Spain registers 683 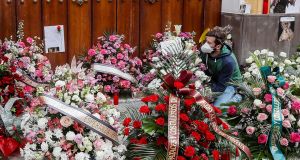 Deaths from the coronavirus epidemic in Italy rose by 610 on Thursday, up from 542 the day before, and the number of new cases also came in higher at 4,204 from a previous 3,836.

The daily tally of cases was the highest since April 5th, and comes as a disappointment to a country in lockdown since March 9th, anxious for clear signs that the illness is in retreat.

The total death toll rose to 18,279, said the Civil Protection Agency, the highest in the world.

The number of confirmed cases climbed to 143,626, the third highest global tally behind those of the United States and Spain.

There were 3,605 people in intensive care on Thursday against 3,693 on Wednesday – a sixth consecutive daily decline offering some good news despite the climb in new cases and fatalities.

Of those originally infected, 28,470 were declared recovered against 26,491 a day earlier.

Spain
The country’s prime minister warned on Thursday that nationwide confinement would likely last until May even though he said the worst should soon be over and the death toll slowed from one of the world’s most devastating outbreaks of the coronavirus.

Speaking to a near-empty parliament as more than 300 politicians participated remotely, prime minister Pedro Sanchez said latest data showed Spain was close to the start of a decline in the epidemic.

“The fire starts to come under control,” he said. Politicians were set to approve a two-week extension of a state of emergency – barring people from leaving homes except for work, food or medicines – until April 26th. Mr Sanchez said he was certain he would have to ask parliament in 15 days for another two-week extension to the lockdown first declared on March 14th.

After two days of increases, the daily coronavirus death toll decreased on Thursday to 683 people in the previous 24 hours, taking the total to 15,238 – second only to Italy, though the ballooning US toll was likely to overtake Spain. Confirmed cases in Spain rose to 152,446 from 146,690.

He credited the “judicious and successful” restrictions with slowing the rate of infections, and said they will be reviewed weekly and mayors may impose stricter rules in their own jurisdictions until Monday night. This is meant to prevent tourists from overwhelming popular destinations during the Easter break.

Botswana
All members of parliament have been placed in mandatory quarantine after one of the country’s coronavirus cases involved a health worker who attended the parliamentary session on Wednesday.

The government of the southern African nation said some of the legislators interacted with the health worker.

Botswana has 13 cases and is under lockdown.

Poland
The government is extending the nationwide isolation until April 26th.

It will keep borders and schools closed, banning international flights and railway connections. It includes quarantine for all entering Poland, except truck drivers.

Prime minister Mateusz Morawiecki said the steps the government has taken against the virus “have proven effective”.

Uganda
Four government officials have been arrested over allegations of inflating prices of relief food.

An anti-corruption unit attached to the presidency reported the four, who include the top accounting officer in the office of the prime minister, are accused of “rejecting lower price offers from various suppliers of maize flour and beans”.

It said the arrests followed a special investigation ordered by President Yoweri Museveni.

The 75-year-old leader has released a homemade exercise video to show citizens they can stay in shape under lockdown, after announcing exercising outdoors was banned.

The video shows the president, barefoot and in grey warm-up gear, jogging around his vast, red-carpeted office, and completing 30 press-ups.

Thailand
Sales of alcohol will be banned in the capital Bangkok for a 10-day period starting on Friday, because people are flouting social distancing rules by holding drinking parties.

The annual Songkran Lunar New Year festival falls within the no-sales period. The holiday is usually celebrated with parties and drinking, which contributes to a spike in traffic deaths.

The official April 13-15 holiday has already been postponed and organised celebrations cancelled.

Officials on the resort island of Phuket are ordering an all-neighbourhood lockdown for at least 14 days to confine people to their homes so health workers can carry out door-to-door temperature checks.

The order applies to the entire province of about 430,000 people, which hosts more than 10 million visitors a year.

Indonesia
President Joko Widodo has officially banned all civil servants, police officers, military personnel and employees of state-owned companies from returning to their home towns to celebrate the end of Ramadan with families.

Mr Widodo said in a video conference that his administration is still evaluating whether a similar prohibition should be imposed on the rest of the people in the world’s most populous Muslim nation. He said the decision will be announced within days.

Croatia
The country has started reopening open air markets, in the first sign of easing of strict rules against the spread of coronavirus.

Wearing protective masks, residents of Zagreb lined up at one of the markets on a sunny day, keeping distance from one another as they waited to buy homegrown fruit, vegetables and other products.

Shoppers said they were happy the markets were reopening, but contended it would be a while before life returns to normal.

Officials are concerned that over the Easter weekend people may be reluctant to stay at home, as they have been instructed to do for weeks under a national state of emergency.

Additional restrictions came into force on Thursday for a four-day period, including a ban on people leaving their council area or more than five people gathering in one place, as well as a flight prohibition.

Slovakia
Authorities have ordered a lockdown of five poor settlements where the Roma live separated from the majority population after 31 people there tested positive for the coronavirus.

Prime minister Igor Matovic announced the lockdown, the first in Slovakia, on Thursday, saying: “I’ll be glad if you understand the necessity of the decision.”

Military health personnel started the testing on Friday in 33 settlements where the poorest of the Roma live, often without access to running water or sewerage systems. Authorities fear such conditions would result in a rapid spreading of the infection.

The testing in the settlements was requested by Roma activists.

Belgium
Authorities in the Walloon region have requested the support of armed forces to tackle the worrying situation at nursing homes, where several hundred residents have died because of Covid-19.

According to official figures released this month, a third of the deaths linked to the virus in the region of southern Belgium have been registered in care homes.

The situation is concerning too in the neighbouring Flanders region, where more than 600 nursing home residents are suspected to have died as a result of the crisis.

Russia
The number of coronavirus cases has surpassed 10,000, after health officials reported 1,459 new cases, with 76 deaths.

The outbreak has picked up speed in recent weeks, with the number of cases growing exponentially and doubling every few days.

President Vladimir Putin earlier this month ordered most Russians to stay off work until the end of April as part of a partial economic shutdown to curb the spread of the coronavirus.

South Korea
At least 74 people who had been diagnosed as recovered from coronavirus have tested positive for a second time after they were released from hospital.

Jeong Eun-kyeong, director of South Korea’s Centres for Disease Control and Prevention, said health authorities were testing virus and serum samples to determine whether patients who tested positive again would be capable of transmitting the virus to others and whether their bodies had properly created antibodies.

She said some of the patients did not show any symptoms before their follow-up tests turned positive, while others were tested again because they were exhibiting respiratory symptoms. She said none of these patients have seen their illness worsen to serious conditions. – Agencies

3:24 Larger retail stores to reopen on Monday ahead of schedule

1 Donald Trump is in trouble, and that could spell very bad news
2 Larger retail stores to reopen on Monday ahead of schedule
3 O’Doherty and Waters ordered to pay legal costs of case against State over Covid-19 laws
4 Strict rules on queuing as Dublin shops prepare to reopen
5 Coronavirus: Five more deaths brings toll in State to 1,664
Real news has value SUBSCRIBE